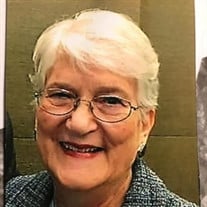 Known as Patsy to all who knew and loved her, Patricia Ruth Shattuck Coleman was born on August 6, 1935 to the late Ovella Ruth Fite Shattuck and William Judson Shattuck, Jr. in LaFayette, Georgia. Her devoted husband of sixty-one years is Richard D. Coleman, formerly of Roswell and currently of Forsyth County, Georgia. Her siblings are William Gerald Shattuck, Stephen Perry Shattuck, and Sandra Lou Shattuck (Melton). She was part of the fifth generation of the Shattuck family in Walker County. Patsy attended LaFayette High School and North Georgia College, graduating from both with Magna Cum Laude honors and as Salutatorian. While at North Georgia, she earned a B.S. Degree in Biology, was named to Who’s Who in American Colleges and Universities, and was a member of Nu Gamma Honorary Scholastic Society. In addition, she was named as Miss NGC and Battalion Sweetheart. In the 1956 Cyclops Annual, she was also named as Most Dependable and Most Popular. After College, Patsy continued her post-graduate studies at Charity Hospital School of Medical Technology in New Orleans, Louisiana, at Phoebe Putney Hospital in Albany, Georgia, and at Emory University in Atlanta, Georgia. After raising her family, she returned to the medical profession and worked as a medical transcriptionist at Piedmont Hospital and North Fulton Regional Hospital. Patsy was known as a kind and gentle wife, mother, and friend. Her interests included painting, art, needlework, and genealogy. She and her husband Richard were active members of Roswell United Methodist Church starting in 1961. While at RUMC, they were part of the Seekers Class. She is survived by her husband Richard Coleman and sons Richard Scott (Lisa) Coleman and Brian Shattuck (Donna) Coleman. She is survived by six grandchildren; Lauren Amanda Coleman (Garrett Bailey), Matthew Ryan Coleman, Christina Michelle Coleman, Taylor Lynn Coleman, Zachary Richard Coleman, and Hannah Sue Coleman. In addition to her parents, Patsy was preceded in death by her beloved son, Bruce Anthony (Dru) Coleman A private memorial service will be held for Patsy at Roswell United Methodist Church with Dr. Tom Davis officiating. Those wishing to may make memorial contributions in Patsy’s memory to; The Biology Department Fund at the University of North Georgia Foundation, P.O. Box 1599 Dahlonega, GA 30533

Known as Patsy to all who knew and loved her, Patricia Ruth Shattuck Coleman was born on August 6, 1935 to the late Ovella Ruth Fite Shattuck and William Judson Shattuck, Jr. in LaFayette, Georgia. Her devoted husband of sixty-one years is Richard... View Obituary & Service Information

The family of Mrs. Patricia "Patsy" Coleman created this Life Tributes page to make it easy to share your memories.

Known as Patsy to all who knew and loved her, Patricia Ruth Shattuck...

Send flowers to the Coleman family.