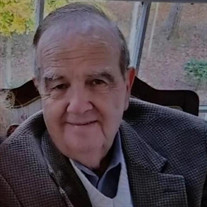 Paul Raymond Hector, 78, of Roswell, Georgia, passed away to heaven on Tuesday, February 15, 2022. Paul was born on August 13, 1943, to Edna and Dewitt Hector in Lake Charles, Louisiana and was the second youngest of seven sons. Paul and his family moved to California in the fifth grade where he met the love of his life, Carole Ann Jolly, who he later married, and they shared 59 wonderful years together. Paul was a lover of life and a lifelong learner. He worked at his family’s hardware store all through high school where he learned about tools and developed a knack for fixing and building things. After he graduated high school, he worked his way up in the grocery chain, Alpha Beta, where he managed multiple grocery stores. He then went on to earn his undergraduate and master’s degrees in Business Administration. Eager to expand his horizons and tool belt, he went to work for The Home Depot where he worked his way up to store manager. In 1995, he was promoted to a Director in Operations for The Home Depot and moved his family to Atlanta, Georgia where he worked at The Home Depot corporate offices until his retirement in 2005. Learning and teaching were his strengths, but Paul’s greatest love was his family and his tremendous faith in God as a lifelong Catholic. Paul will be remembered for his quick wit, sense of humor and willingness to always be available to help others by listening or lending a hand to anyone in need. Paul was a consummate family man and enjoyed spending time with them anywhere doing almost anything. He enjoyed family gatherings with his children, grandchildren and extended family, trips to Asheville, camping in Yosemite, working on home improvement projects, In N Out hamburgers, bird watching with his wife in the mornings, and being the best husband, father and grandfather he could be. Paul was preceded in death by his mother, father, and six brothers. He is survived by his loving wife, Carole Jolly Hector, his four children: Anne Hector (Ashley Miller); Scot Hector – and his children Bethany Aguilar (Jeffrey), Mallory, Hannah, and Hayes; Chris Hector (Angela) – and their children Joshua and Sean; and David Hector (Sudie) – and their children Ben, Laney Grace, Morgan, Elliott; and many nieces, nephews, and extended family. A Funeral Mass will be held in his honor on Friday, March 4, 2022, at 2:00pm at St Peter Chanel Catholic Church 11330 Woodstock Rd. Roswell, Georgia 30075. Flowers may be sent to Northside Chapel Funeral Directors and Crematory, 12050 Crabapple Rd. Roswell, Georgia, 30075 by Thursday March 3. In lieu of flowers, those wishing to make donations in his honor can do so to the American Diabetes Association www.diabetes.org

Paul Raymond Hector, 78, of Roswell, Georgia, passed away to heaven on Tuesday, February 15, 2022. Paul was born on August 13, 1943, to Edna and Dewitt Hector in Lake Charles, Louisiana and was the second youngest of seven sons. Paul and his... View Obituary & Service Information

The family of Mr. Paul Raymond Hector created this Life Tributes page to make it easy to share your memories.

Paul Raymond Hector, 78, of Roswell, Georgia, passed away to...

Send flowers to the Hector family.