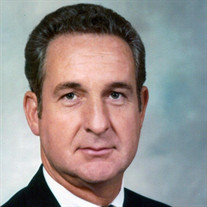 Paul Letcher Knuckles (December 13 1933, Pineville, KY - September 22, 2021, Roswell, GA) Paul is at peace and home with the Lord. He passed away from respiratory failure surrounded by loved ones on Wednesday, September 22. He was 87 years old, just shy of his 88th birthday in December and his 67th wedding anniversary in October. Paul was the youngest of ten children of Millard Fillmore Knuckles and Lydia Greene Knuckles of Kentucky. He is preceded in death by all of his brothers and sisters: Della June Doan, Thomas Calloway Knuckles, Roberta Thomas, Brown Lee Knuckles, James Oscar Knuckles, Ruby Mae Myers, Charles Cecil Knuckles, and Franklin Delano Knuckles. He is survived by his wife: Fay Etta Roberts Knuckles (Roswell, GA), children: Michael Paul Knuckles & wife, Dawn (Kennesaw, GA), Victoria Lynne Knuckles (Roswell, GA), grandchildren: Bradley James Knuckles (Birmingham, AL), Andrew Thomas Knuckles & wife, Carlee (Alpharetta, GA) and numerous nieces and nephews. He married Fay Etta Roberts (daughter of Park L. Roberts and Carrie C. Hall Roberts) from Middlesboro, KY in 1954. At Bell County High School, Paul played football for four years, served as team captain, was named All-Conference, served as senior class president and voted Most Popular Boy. He studied business and finance at Eastern Kentucky University, Darden School of Business at the University of Virginia, Northern Kentucky University, and Xavier University, where he earned a Masters in Business Administration. He was the last of 6 brothers who all served in the military. In 1955, he entered the U.S. Army, transferred to Fort Leonard Wood, Missouri and was assigned to the Nike Missile Division. He received missile training at White Sands, NM and then stationed at a Nike Missile Battalion near Detroit, MI. During this era in history, Detroit was the heart of the U.S. Industrial Belt and was protected by four underground missile installations around the city. Following active duty, he continued to serve in the Army Reserve until 1968. Paul began his professional career in Detroit, MI, working for the Chrysler Corporation then with General Motors Acceptance Corporation. Later, he spent 13 years working in various management positions for the Ford Motor Credit Company in several different cities including Ford Headquarters in Dearborn, MI. This evolved into a 26 year corporate banking/commercial lending career at Fifth Third Bank and Provident Bank in Cincinnati, OH. Paul & family had relocated a total of 15 times in the early years until returning to the Northern KY/Cincinnati area in 1973. Although he worked in downtown Cincinnati during the remainder of his career, his heart was always in Kentucky and he did not hesitate to commute from south of the Ohio River in Edgewood, KY. Paul was an avid reader with a keen interest in history, specifically American History and family ancestry. He said, "In order to understand yourself, you must study history to understand who we are, what we stand for and why as a people." He was very patriotic and always held conservative beliefs and values. He also cited that team sports was an important influence in his life saying, "Team sports teaches you how to get along with your teammates and others. This lesson will serve you well during life in being able to work as part of a team with your associates in your chosen field of work." He loved automobiles and the history of the automobile industry even submitting his graduate school research paper entitled "Management Comparison of Henry Ford and Henry Ford II". He was also an accomplished golfer playing all of his adult life. He spent many hours at his clubs, Atlanta National Golf Club and Triple Crown Country Club (which he was a founding member). Arnold Palmer was his hero and he made sure his children learned the game at a young age. He remained an devoted sports fan throughout his life, specifically football, basketball and golf. He faithfully cheered on the University of Kentucky Wildcats, Cincinnati Bengals, and Cleveland Browns. He never missed a televised golf tournament. He resided in Roswell, GA and Edgewood, KY for many years. The family is grateful to have been able to enjoy his precious last days. Although a difficult goodbye, it was also a very sweet time. During the last couple days, the family shared old photos, took turns reading scripture, and downloaded music putting the speaker next to his ear. He listened to old Christian hymns as well as "real" country music. During some of his final moments, he was listening to Hank Williams. He could only slightly whisper but would smile and give a little chuckle along the way. A private ceremony will be held at Georgia National Veterans Cemetery in Canton, Georgia. A memorial service for extended family and friends may be held at a later date in Pineville, KY. Please view the full obituary and photos at the Northside Chapel (Roswell, GA) website: https://www.northsidechapel.com/. The family will appreciate any memories you wish to share on the Tribute page. No flowers please. If you wish, you may make a donation to either of two ministries of Binghamtown Baptist Church in Middlesboro, KY. On the payment page, before you enter your information, please click on "Write A Note" and type "for Paul Knuckles". 1. New Unto Others Thrift Shop ( http://www.binghamtown.org/new-unto-others ) OR 2. WMIK Family Christian Radio ( http://www.binghamtown.org/wmik-radio )

Paul Letcher Knuckles (December 13 1933, Pineville, KY - September 22, 2021, Roswell, GA) Paul is at peace and home with the Lord. He passed away from respiratory failure surrounded by loved ones on Wednesday, September 22. He was 87 years... View Obituary & Service Information

The family of Mr. Paul Letcher Knuckles created this Life Tributes page to make it easy to share your memories.

Send flowers to the Knuckles family.