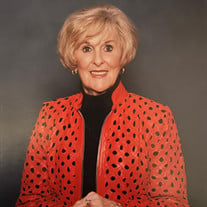 Peggy Berry Kynoch, 87, of Dunwoody, GA passed away March 6, 2022. Peggy was born on October 16, 1934 in Roxboro, NC to the late Joyce and James Berry. Peggy graduated from Watts School of Nursing in Durham, NC, in 1955. She became a Registered Nurse and served in various capacities over her 50+ year career – from ER Nurse to Head RN for an OB/GYN practice, to Director of Nursing for a Home Health Care agency and last worked for a Hospice Care Agency. Peggy met her future husband, Kirk, when she was just 13 – they were married 8 years later in 1955 and lived in Columbia, SC and Charlotte, NC before moving to Dunwoody, GA in 1969. Peggy was an “energizer bunny” her entire life. While raising her children she was the ultimate volunteer, serving as Cub Scout and Girl Scout Leader, Team Mom for numerous baseball, football and cheerleading teams and PTA President, to name a few. In her “spare time”, she picked up a few “bag tags” playing on many winning ALTA tennis teams, enjoyed monthly Bridge Clubs and even had an interior decorating business with her daughter, Lisa. Peggy was also the ultimate entertainer, not just for her and Kirk’s friends, but for her children and their friends as well. There were many celebrations at the Kynoch home, and Peggy was known for being able to host a dinner for 20 or more with only an hour’s notice. She’d say “Oh, I can make the house look beautiful in just a few minutes, but don’t ever look in my closets!” When Peggy and Kirk became “empty nesters” they traveled in the US, Europe and the Far East. But “Family” was always her #1 priority, so she organized an annual Kynoch Family Summer Vacation for 30+ years. Her children continue this tradition to this day. Peggy is preceded in death by her parents, James and Joyce Berry, her sister, Betty Stox and her husband, Kirk Kynoch. She is survived by sons Brent and Kevin (Ann Marie), daughter Lisa (Mark), grandchildren Lindsay (Matt), Matthew, Lucas, Ian, Cole, River, Mackenzie and Kendall and great grandchildren Palmer, Kirkland, Ali and one on the way. In lieu of flowers, please make donations in memory of Peggy to the National Alzheimer’s Association (www.alz.org). A Celebration of Life will be held on May 7, 2022 with a service at Dunwoody United Methodist Church, Dunwoody, GA, at 11am followed by a reception at Marlow’s Tavern, Dunwoody, GA.

Peggy Berry Kynoch, 87, of Dunwoody, GA passed away March 6, 2022. Peggy was born on October 16, 1934 in Roxboro, NC to the late Joyce and James Berry. Peggy graduated from Watts School of Nursing in Durham, NC, in 1955. She became a Registered... View Obituary & Service Information

The family of Mrs. Peggy B. Kynoch created this Life Tributes page to make it easy to share your memories.

Send flowers to the Kynoch family.