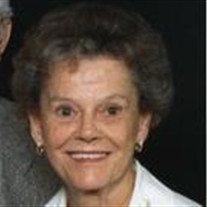 “‘Dust thou art, to dust returnest,’ was not spoken of the soul.” from “A Psalm of Life,” by Henry Wadsworth Longfellow. The life of Peggy Dorothea Cobb Sessoms bears witness to this truth from her favorite poem, for surely, though her body became frail and her mind clouded, her soul’s faith remained strong, and, even now, that soul rejoices in glory with Christ, her Savior. Born in 1924, Peggy met Jerry, the love of her life, in the dining hall of North Greenville Academy around 1940. The two married in 1942 and spent the next 62 years sharing their love, their strength, and their faith with friends and a growing family. Their legacy of loving their Lord and their neighbors remains a treasure to their children, Ann (Bill) and Mike (Betsy); six grandchildren; and fourteen great- grandchildren. Affectionately dubbed “the Flea” and later “Granny Flea” for her tiny frame and coal black hair, Peggy had a healthy sense of mischief and a laugh that invited everyone around into her joy. She was also fiercely competitive, never losing count of anyone’s strokes in golf, her favorite game, whether it was putt-putt with the grandchildren or a tournament with her ladies’ group. In addition to golf, Peggy loved coconut cake, well-lit Christmas trees, and fabulous shoes. In her later years, Peggy’s faith enabled her to walk the downward spiral of dementia with a grace and peace that spoke of God’s abiding care far more eloquently than words. Having opened with a line from Peggy’s favorite poem, it seems fit to close with a verse from her favorite hymn: “O love that will not let me go, I rest my weary soul in thee. I give thee back the life I owe, that in thine ocean depths its flow may richer, fuller be.” Weary no longer, Peggy’s soul has found its perfect rest, and her family rejoices in the richness of her life - both here with us and in eternity. Given the restrictions on gatherings at this time and current events in general, Peggy’s family asks that, in lieu of sending flowers, you call your local hospital and ask how you can bless the staff there in her honor.

The family of Mrs. Peggy C. Sessoms created this Life Tributes page to make it easy to share your memories.

Send flowers to the Sessoms family.