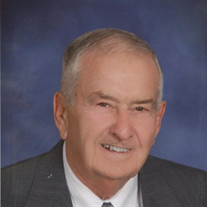 Peter Pesa age 85 of Milton, GA. passed away peacefully on February 9, 2021 with his wife and daughter at his side, after a long battle with Alzheimer’s disease. Peter grew up in Revere, MA and moved to Lynnfield, MA where he raised his family. Upon his retirement in 1999, he fulfilled a lifelong dream of getting away from the snow, moving to Englewood, FL where he lived for more than 20 years. He was an Air Force Veteran and honorably served his country in the Korean War. Peter was an engineer who spent over 25 years of his career in the missile defense group with Raytheon Technologies. He also served his community as the Town Assessor of Lynnfield, Massachusetts for 21 years. An engineer by heart, Peter loved to tackle any home renovation that came his way. His family, friends and neighbors all benefited from his skills as a craftsman. He had a lifetime of community service as a member of various organizations (Knights of Columbus, Elks Club, Tamiami Amateur Radio Club, Italian American Club, Habitat for Humanity). He was also a life-long member of the Catholic Church and served as a Eucharistic Minister. Peter’s greatest accomplishment was his commitment and devotion to family, friends, and faith. He had a wonderful and playful sense of humor and often times played pranks on the friends and family he loved most. While he was passionate and strong-willed, those that knew him well, discovered he was a gentle as a lamb. He was preceded in death by his parents, Pietro and Maria (Sarni) Pesa; brother, Pasquale (Pat) Pesa and sister, Mary Cutillo. He is the beloved husband of Joanne Pesa, with whom he shared 53 years of marriage. In addition to his wife, Peter leaves children, Peter J. Pesa (Sarah), John J. Pesa (Amy), Mary A. O’Connell (Robert) and Paul A. Pesa (Karen); and 10 cherished grandchildren, Simon Pesa, Noelle Pesa, Salvatore Pesa, Patrick O’Connell, John O’Connell, Kyle O’Connell, Megan Pesa, Allison Pesa, Lauren Pesa and Brendan Pesa. In lieu of flowers the family requests that donations be made to the Alzheimer’s Association.

Peter Pesa age 85 of Milton, GA. passed away peacefully on February 9, 2021 with his wife and daughter at his side, after a long battle with Alzheimer&#8217;s disease. Peter grew up in Revere, MA and moved to Lynnfield, MA where he raised... View Obituary & Service Information

The family of Mr. Peter Pesa created this Life Tributes page to make it easy to share your memories.