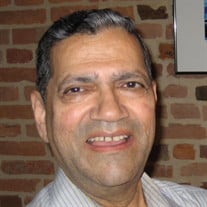 Ramchandra Govind Sidhaye was born on April 6th, 1941 in Jaysingpur, Maharashtra, India and passed away on April 13th, 2021 after a long battle with prostate cancer. Ram spent his childhood playing neighborhood games in Jaysingpur and helping his father with his printing business. He attended Siddhartha College in Mumbai and completed a Bachelors degree in Physics & Math. He then went on to the University of Mumbai where he completed a Masters degree in the same subjects. After teaching at Mumbai University for some time he moved to the U.S. in 1968 and completed additional studies at the Illinois Institute of Technology. Ram spent the early portion of his career working in management at GE which eventually brought him to Atlanta, GA in 1980. Later, he moved back to India in 1985 to work for Tata Unisys. In 1989 he and his family returned to Atlanta so he could pursue his dream of starting his own software consultancy business which he continued until his retirement in 2006. Ram had varied interests and was a leader in many community organizations. One highlight was being Chairman of the board of the Indian American Cultural Association, and organizing the 1997 Festival of India which celebrated India's 50 years of independence. He enjoyed playing bridge and spending time with his grandchildren. In addition he was an avid reader of spiritual texts and books relating to U.S. history. Above all, Ram was deeply devoted to his family, a loyal friend, and imbued with a strong sense of faith. Ram is survived by his loving wife Shashi to whom he was married for 48 years. Additionally he is survived by his son Aniket and daughter-in-law Keerthana of Clarksville, MD, daughter Era and son-in-law Neil of Dunwoody, GA, and his 4 "birdies" - his grandchildren Lassya, Jayen, Aakash, and Thage whom he doted upon. Additionally there are many cousins, nephews and nieces whom he loved. He is preceded in death by his parents Govind and Kashi as well as his older siblings Chabatai, Suddhatai, and Bal dada (Achuyt Govind). While we all feel his loss acutely, we remember his positive attitude and zest for life which will live on in all of our memories and sustain us. A private Hindu memorial service will be held on Friday, April 16th, 2021 at 10am. In lieu of flowers, you may donate to Fisher House Foundation or Maharashtra Foundation, two organizations to which Ram was committed.

Ramchandra Govind Sidhaye was born on April 6th, 1941 in Jaysingpur, Maharashtra, India and passed away on April 13th, 2021 after a long battle with prostate cancer. Ram spent his childhood playing neighborhood games in Jaysingpur and helping... View Obituary & Service Information

The family of Mr. Ramchandra Govind Sidhaye created this Life Tributes page to make it easy to share your memories.

Ramchandra Govind Sidhaye was born on April 6th, 1941 in Jaysingpur,...

Send flowers to the Sidhaye family.