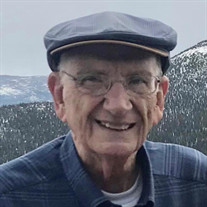 Raymond (Ray) Joseph Barry Jr., died peacefully at home in Milton, GA surrounded by family on Sunday, August 1, 2021 at the age of 87 after a courageous battle with Cancer. He lived in the Atlanta area for almost a half of a century. Ray was born on May 28, 1934 in Chicago, IL and as a young boy moved to Louisville, KY. Ray graduated from Saint Xavier High School and Bellarmine College (now Bellarmine University) where he received a degree in Psychology and was also the president of his class. He married his beloved wife, Mary Ann, of 61 years in 1959. After several moves for his career, they settled in the Atlanta area and raised their four children. He worked for Social Security Administration until he retired and started a second career running a Master’s Degree program for Central Michigan University at Fort McPherson for the Military. He adored his family and was beloved by all who knew him. He had a great love of our country and his Catholic Faith. He was a very generous, loving, kind man, but most will remember him for his quick wit and humor. He had a love for travel and was a community leader. He was also an accomplished poet and could play the harmonica beautifully. He is survived by his wife, Mary Ann; his four children, Raymond Barry III, Henry Barry (Tamara), Julie Hanson (Kevin), and Melissa Dyches (Bill); his four grandchildren, Sam Barry, Jack Barry, Catherine Dyches and William Dyches; his sister, Mary Lou Gregory; and many nieces and nephews. Ray is predeceased by his parents, Louise and Raymond Barry, Sr.. The family will hold a funeral service on Monday, August 9th, 2021 at 10:00am at Saint Thomas Aquinas Catholic Church at 535 Rucker Road, Alpharetta, GaA 30004. In lieu of flowers, please send any memorial gifts to Saint Vincent de Paul Society at Saint Thomas Aquinas; https://www.sta.org

Raymond (Ray) Joseph Barry Jr., died peacefully at home in Milton, GA surrounded by family on Sunday, August 1, 2021 at the age of 87 after a courageous battle with Cancer. He lived in the Atlanta area for almost a half of a century. Ray was... View Obituary & Service Information

The family of Mr. Raymond J. Barry Jr. created this Life Tributes page to make it easy to share your memories.

Send flowers to the Barry family.