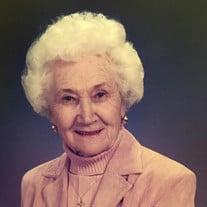 Regina T. “Jean” Brennan Cameron was born on November 11, 1918. She was the sixth of nine children born to William and Susan Brennan of Bridgeport, Pennsylvania. Her siblings who predeceased her were William, Thomas, Martin, Joseph and Jack Brennan and Marie Nihill, Susan Leigh and Elizabeth Bowe. She was also predeceased by her husband of fifty-two years, James Cameron, her son, John Cameron, her son-in-law, James Flowers and daughter-in-law, Denise Cameron. She is survived by her loving family, Suzanne Flowers, James Cameron(Betsy), Barbara Cameron, Marilyn Joyner(Fred), Mark Cameron and Janice Cobb(Cliff) and fourteen grandchildren, Staci Carpenter, Patrick Flowers, Laura Lowry, Bryan Cameron, David Cameron, Kevin Cameron, Jordan Cameron, Darien Cameron, Genna Cameron, Brennan Cameron, Jessica Joyner, Allison Bickers, Evan Cobb and Jay Cobb, fourteen great-grandchildren and one great-great granddaughter. Jean and her husband, Jim, were transferred from Pennsylvania to Gainesville, Georgia in 1956 and then moved to Dahlonega in 1962. In 1979 they retired to Lake Lanier where she lived until 2015 after Jim’s passing in 1993. She has lived at Brookdale community in Roswell, Georgia since 2015. Jean was the loving matriarch of a large family and enjoyed hosting family gatherings and celebrations of family events and holiday occasions. She was active in Catholic Churches in Gainesville and Dahlonega and volunteered with civic and charitable organizations. She had an endearing personality, a great sense of humor and enjoyed lasting friendships throughout her life. Funeral arrangements will be held at a later date due to current public health restrictions. In lieu of flowers, please consider donations to St. Vincent de Paul Society or to the charity of your choice.

Regina T. &#8220;Jean&#8221; Brennan Cameron was born on November 11, 1918. She was the sixth of nine children born to William and Susan Brennan of Bridgeport, Pennsylvania. Her siblings who predeceased her were William, Thomas, Martin, Joseph... View Obituary & Service Information

The family of Mrs. Regina Cameron created this Life Tributes page to make it easy to share your memories.

Send flowers to the Cameron family.