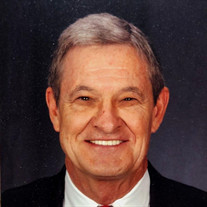 Mr. Richard Burnett Cobb, Sr, age 82 of Roswell, Georgia passed away on Sunday evening, November 28, 2021. He was born November 20, 1939, in Jacksonville, Florida, the son of the late Gilbert Lamar Cobb, Sr, and the late Jean Burnett Cobb. His family relocated to Atlanta in the mid-1940s. He was raised in the Druid Hills community of Dekalb County and graduated from the Georgia Institute of Technology in 1961. He married Gwendolyn Starr Roane in 1962. After college, he was employed by the engineering consulting firm of Kurt Salmon Associates from 1964 to 1971. In 1971, he joined the staff of Governor Jimmy Carter to assist in the reorganization of the Executive Branch of Georgia State Government and later served as Deputy Director of the Office of Planning and Budget. He continued to serve in that role through the first four-year term of Governor George Busbee. He left Georgia State Government in 1978 to take a position with the American Petroleum Institute as Executive Director of the Georgia Petroleum Council. After serving 34 years for API, on the last day of the 2012 Georgia General Assembly, he was asked to remove his lobbyist badge and was escorted inside to the podium with Lt. Governor, Casey Cagle who praised him for his 34 years of service to the oil industry and the General Assembly. After retiring in 2012, Ric spent his time playing golf and spending time with his grandchildren. Ric was named to the Georgia Lobbyists Hall of Fame in the James Political magazine and in 2021 was named one of the top lobbyists in Georgia. Ric was once described as “a man possessing a Southern charm as smooth and sweet as a Georgia peach and a wit that had the bite of moonshine.” He was revered and respected by his friends and colleagues, and detractors alike. A steady hand and calm demeanor were always his hallmark in addition to the “Cobb sense of humor.” When asked, Ric was always willing to share his Christian convictions and provide spiritual guidance. In addition to his wife of 59 years, Mrs. Gwen Roane Cobb, he is survived by his brother Gilbert Lamar, Jr; daughter and son-in-law, Robyn and Mike Yawn; daughter and son-in-law, Kimberly and Julian Falls; son and daughter-in-law, Rick and Trish Cobb; 6 grandchildren: Avery, Isabelle, Campbell, Landon, and Lawson. A memorial service will be conducted Saturday, December 11, 2021 at 11:00 a.m. from Northside Chapel Funeral Directors and Crematory in Roswell (12050 Crabapple Rd, Roswell, GA 30075). No visitation prior to the service, however, the family will receive friends after the service. Private family interment to be held at a later date. In lieu of flowers, memorial contributions can be made to the Wounded Warrior Project.

The family of Mr. Richard Burnett Cobb Sr. created this Life Tributes page to make it easy to share your memories.

Send flowers to the Cobb family.