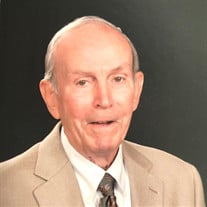 Robert “Bob” McDonald Davis, 84, passed away peacefully on May 29, 2021 surrounded by his 3 daughters. A native of Beaufort, North Carolina, he was born on August 6, 1936, the 10th of 11 children born to Leslie C. Davis and Uldene M. Davis. Bob graduated from Beaufort High School and attended Wake Forest University and later North Carolina State University before pausing his studies to enlist and serve our nation in The United States Army. After a tour of duty in Germany and completion of his service in the Army, he finished his studies at Campbell University, earning a B.S. in Natural Science with a minor in Mathematics. After marrying his childhood sweetheart and love of his life, Barbara Harris Davis, in March 1961, Bob relocated with Barbara to Virginia where he was employed by the Newport News Shipbuilding as an Electrical Engineer. His work focused on electrical design of Naval Aircraft Carriers and Submarines encompassing Atomic Power Design, Nuclear Design and High Voltage Switchboards. His completed projects included the USS Nimitz (C-68), USS Dwight D. Eisenhower (CVN-69) and USS Abraham Lincoln (CVN 72). He retired from Newport News Shipbuilding after 30 years of stellar service to the company. Bob and Barbara raised their three daughters in Yorktown, Virginia and in their spare time lovingly restored their historic 1800’s family home. Bob had an absolutely brilliant mind and could build or fix anything! He found joy in tinkering on his projects and was always quick to use his skills and talent to help anyone in need. Bob relocated with Barbara to Georgia in 2012 to be closer to his children and grandchildren. He joined Roswell United Methodist Church and was an active member of the CUC Sunday School Class. Bob was many things to many people.... a loving son, a loyal brother, a devoted husband, a wonderful father who was so proud to be a “girl dad”, the sweetest “papa” to his grandchildren, a loving uncle to nieces and nephews, a mentor to numerous employees and a caring friend to many. He had a dry wit that would always put a smile on your face. He was a generous and kind man of principle, of the highest integrity and maintained strong faith in our Lord Jesus Christ. He will be missed immensely and remembered always. Bob was preceded in death by his wife of 58 years, Barbara H. Davis; his parents Leslie C. Davis and Uldene M. Davis; five brothers, Charles Davis, William Davis, Harry Davis, Gordon Davis and James Davis; five sisters, Evelyn Lewis, Jan Sharp, Iris French, Marie Staton and Kathryn Jones; and his beloved pups Kisba and Murphy. He is survived by his daughters Robin Teves and her husband Scott of Sacramento, CA; Wendy King and her husband Bob of Johns Creek, GA; Stacey Howley and her husband Greg of Sandy Springs, GA; and his grandchildren David Teves, Mason King, Madison King and Luke Howley. The family would like to extend their heartfelt appreciation to the phenomenal staff at Sunrise at Ivey Ridge that lovingly cared for Mr. Davis throughout his residency and went above and beyond to provide him with exceptional support for his needs. They would also like to give special thanks to the wonderful caregivers with Agape Hospice that helped provide comfort to Mr. Davis in his final days. A Celebration of Life will be held on Friday June 4, 2021 at 10:30AM in the Chapel of the Roswell United Methodist Church, Roswell, GA. In lieu of flowers, memorial donations may be made to the Wounded Warrior Project or to the Parkinson’s Foundation.

The family of Mr. Robert M. Davis created this Life Tributes page to make it easy to share your memories.

Robert “Bob” McDonald Davis, 84, passed away peacefully on May...

Send flowers to the Davis family.