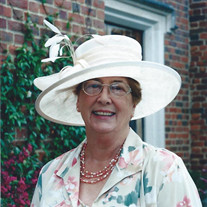 Ruby Frances Gaisford was born on June 1, 1934, in southeast London, the first of three siblings. She always loved her younger brothers, John and Ron. World War 2 was starting in Europe as she was starting school, and with the threat of daily bombing, it was decided to move out of London to a safer part of the country. Her happiest days were in Salcombe, a small wartime American naval base where the servicemen would often give her rides to school in their trucks and jeeps. She did very well at school passing her exams, and when it was safer to return home, she attended the Prendergast Grammar School in Lewisham, southeast London. After school, she loved working at the Westminster Bank in Covent Garden central London. She always enjoyed spending time with her very best friend Dorothy who lived across the road. She happily became part of the family when she married Dorothy’s older brother, Harold Eagles, in 1959. She and Harry had two daughters, Elizabeth and Alison, that she cherished raising. After a few years Harry was promoted to become President of GEC Avionics in Atlanta, so the whole family, including their beloved cat, crossed the Atlantic to settle in Roswell in 1979. She remained happily married to Harry until his passing in 2002. Her devoted care throughout his terminal illness reflected her nurturing and loving disposition. Ruby was always a good friend to others and had many good friends throughout her life. She particularly loved to host all her English relatives, taking them out and about to see America and preparing wonderful meals – she was a perfect hostess. She also loved spending time in her beautiful garden and was a longtime member of the Brookfield West Garden Club. She will be missed so much by her children, grandchildren, brother and many other family and friends. She will always be fondly remembered and in our hearts forever. Celebration of LIfe Service: Tuesday, April 12 at 6:30pm Journey Christian Church 415 Charles Cox Dr, Canton, GA 30115 In lieu of flowers, please consider making a donation to Journey Christian Church or the charity of your choice.

Ruby Frances Gaisford was born on June 1, 1934, in southeast London, the first of three siblings. She always loved her younger brothers, John and Ron. World War 2 was starting in Europe as she was starting school, and with the threat of daily... View Obituary & Service Information

The family of Mrs. Ruby Eagles created this Life Tributes page to make it easy to share your memories.

Send flowers to the Eagles family.