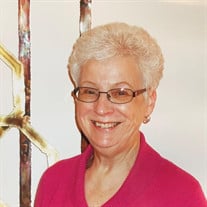 Ruth Mary Rolfes Phelps passed away peacefully at her home in St. George Village in Roswell, Georgia on Wednesday, January 5, 2022. Ruth was born January 3, 1938 at her parents’ home near Le Mars, Iowa. She was one of the twelve children of Frank and Ida Rolfes. She attended Liberty Consolidated School near Merrill, Iowa and graduated from Akron, Iowa High School. She is also a graduate of Wayne State College in Wayne, Nebraska and received her M.A. and Ph.D. from Miami University in Oxford, OH. Ruth began her teaching career in Bellevue, Nebraska. She taught elementary school at various grades for a few years and then spent most of her career as the head librarian and media specialist for Liberty Elementary School and later Heritage Elementary School, both near Cincinnati, OH. Ruth was also an adjunct professor of Library Science at Xavier University in Cincinnati, OH. For over 40 years, she was a leader with the Gamma Xi chapter of Delta Kappa Gamma, an international society focused on developing leading women educators. For many of those 40+ years she served in formal leadership roles including Treasurer and separately Vice President in charge of programs. After retirement, Ruth became an active volunteer with multiple organizations including The Aronoff Center for the Arts in Cincinnati, St. John’s Catholic Church, Whiz Kids and others. Ruth was married to Lynn Phelps and is survived by their son Brad Phelps of Atlanta, Georgia along with Brad’s wife Kristen and their children Ryan and Mckenna. Ruth is also survived by her brothers Gene of Phoenix, Arizona, Stan of Akron, Iowa and sisters Paula Winker of Celebration, Florida, Clarice Wilken of Akron, Iowa and Pat Christensen of Marshalltown, Iowa. Ruth was preceded in death by her parents and brothers Isadore, Daniel, Virgil, C.J., Robert and Lee. Ruth will be remembered for her love of family and her quiet yet significant accomplishments as an educator and librarian. Her humility and sensitivity to the needs of others along with her willingness to contribute helped define her. She always thought of others first. After moving to Atlanta shortly after Ryan’s birth, Ruth loved every minute she spent with her grandkids and thoroughly enjoyed always bringing new books to read with them. Her dedication to her religious faith was an inspiration to her family and friends. A memorial service will be held at St. Peter Chanel Catholic Church in Roswell, Georgia at 2:00 pm ET on Friday January 14th. The service will be livestreamed via https://www.youtube.com/watch?v=Y_Qgfr5N2kg Her funeral service will take place on Saturday, July 30, 2022 at St. Patrick’s Catholic Church in Akron, Iowa and burial following in St. Patrick’s Cemetery in Akron. In Lieu of Flowers, donations may be made in Ruth’s memory to either of the following: St. John’s Catholic Church in Cincinnati, Ohio https://stjohnwc.weshareonline.org/ The Winship Cancer Institute at Emory University: https://winshipcancer.emory.edu/support-winship/give/index.html

Ruth Mary Rolfes Phelps passed away peacefully at her home in St. George Village in Roswell, Georgia on Wednesday, January 5, 2022. Ruth was born January 3, 1938 at her parents&#8217; home near Le Mars, Iowa. She was one of the twelve children... View Obituary & Service Information

The family of Mrs. Ruth Phelps created this Life Tributes page to make it easy to share your memories.

Ruth Mary Rolfes Phelps passed away peacefully at her home in...

Send flowers to the Phelps family.