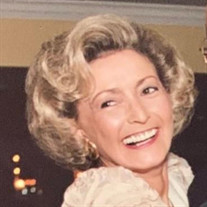 Mother peacefully met Jesus on the afternoon of April 7, 2022, with family by her side. Sandra Kahn Hearn was born February 11, 1937, in Baltimore, Maryland, to Ada Estelle Johnson Kahn and Carroll Kahn and was raised in Palm Beach, Florida. Having terrible asthma, doctors urged my grandparents to move to Florida, where the air would be better for her lungs. They made Palm Beach home. Mother grew up in a wonderful time in Florida on 30th and 34th Streets. Summers were spent visiting aunts, uncles and cousins in Portsmouth, Virginia, South Carolina and North Carolina with my grandmother, the youngest of 10. A graduate of Palm Beach High School, she was active in intramurals, GAA, Girls Choir, Royal Palm Staff, Frond Staff, Hi-Notes, Allied Youth, Press Club, was a Sophomore Superlative and apparently, in her Senior yearbook, she "left Tony and Abner all the fun on the Hill." In reading her Palm Beach High School friends' entries, I had to laugh as the Hill was mentioned quite often. I hope they are all having a good time on that Hill. Between school and her active membership in First Baptist Church of Palm Beach, mother had a tight friend group, which included the late Burt "Buddy" Reynolds, and she stayed in touch with all of them through the years. Later she moved to Cocoa Beach, Florida, with friend Collette Gurney Hurst and pursued a career with General Electric, which was contracted at the time by NASA, where she met the love of her life, my father, Harold "H.C." Clyde Hearn III, who was responsible for scheduling the launches. They married on November 24, 1967, at First United Methodist Church of Cocoa Beach. Later in 1969, I was born, and Dad, an aeronautical engineer with a master's in business, decided to make a change; they moved to Delray Beach so that dad could pursue a career with Merrill Lynch. Mother stayed home to raise me and manage the household, and boy could she manage. She was very talented in many ways and always had her hands busy. She could sew clothes, crochet, paint, make Christmas ornaments, bake, cook, entertain and create the most beautiful tablescapes. In fact, the Biltmore wanted to hire her as their event decorator, but she turned them down. She made the best brownies, a mean Rusty Nail or scotch and water, without the water, and my favorite spaghetti sauce, of which she would never share the recipe. Mother sometimes would not say I love you, yet told the grandchildren "Isle of View" and had them say it three times fast. Life in Delray Beach was wonderful, and she made the most remarkable friend group with my father. They were part of the Jublieers, formed a travel group called the White Feathers and were social members of the Ocean Club of Florida. Through the years, they traveled with friends, entertained, went to parties, volunteered and were very generous in so many ways. Every weekend was filled with the true treasure of friendship, and I am grateful to have witnessed it all. Never one to turn down an invitation or a dinner out, Mother could sometimes be seen running into a favorite restaurant kitchen and grabbing her waiter to dance. There may have been stories of jumping in pools, high heels and all! Mother was a dutiful mother and grandmother. She was always impeccably dressed for the day and the occasion. She was extremely generous, talented and on the stubborn side. She made friends with all types of people. My childhood friends loved her. One described her as classy and sassy—spot on. Mother asked Jesus every day to take her after dad died, and he finally did 10 years later with family by her side. She is survived by Abbe Carroll Hearn Laboda, daughter; Steve Laboda, son-in-law; two grandchildren Morgan Delaney Laboda and Lauren Bailey Laboda; step-daughter Kristin Hearn Levi; step-grandson Nick Levi; cousins Bonnie Broughton, Cindy Broughton and Kendall Broughton. Mother left me with directions: no service, just a party and spread her ashes in the Atlantic Ocean off Palm Beach just as my father was done. Her chosen songs are "No Man is an Island," "The Old Rugged Cross," "You'll Never Walk Alone," "I'll Walk with God" and "Let There Be Peace on Earth." A luncheon in her honor will be held at 12 p.m., May 6, 2022, at Delray Dunes Golf and Country Club. In lieu of flowers, donations can be made in her honor to the Wounded Warrior Project or the Crabapple Knoll Veterinarian Stray Program. Enjoy dancing again, Sandy!

Mother peacefully met Jesus on the afternoon of April 7, 2022, with family by her side. Sandra Kahn Hearn was born February 11, 1937, in Baltimore, Maryland, to Ada Estelle Johnson Kahn and Carroll Kahn and was raised in Palm Beach, Florida.... View Obituary & Service Information

The family of Sandra Kahn Hearn created this Life Tributes page to make it easy to share your memories.

Send flowers to the Hearn family.