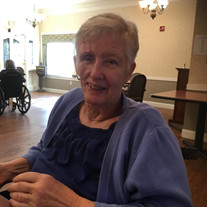 Sandra June (York) Woods, age 77, passed away peacefully on September 21, 2021 following a brief illness and a courageous battle with Parkinson’s Disease. Sandra was born on November 15, 1943 in Butler, Missouri to James Allen and Betty June (Highley) York. Raised in the same general area, including Amsterdam, Missouri, Sandra graduated as valedictorian from Miami R-1 High School. The family moved to Bolivar, Missouri in 1961 where she continued her education at Southwest Baptist College. Sandra had a life-long love of learning and a commitment to share that love of learning with her colleagues as well as the students she taught. Sandra received numerous degrees from Southwest Missouri State University including a BS Degree in Special Education, Summa Cum Laude; MS in Education in Remedial Reading; and a Specialist Degree in Elementary Administration with a certification as Director of Special Education. She taught special education from 1974 to 1993 at both Republic R-III School System in Republic, Missouri and Dallas County R-1 School System in Buffalo, Missouri. In 1994, she became the Elementary Administrator and Director of Special Education for Dallas County R-1 and served in this position until her retirement in 2005. In 1999, Sandra reached her life-long goal and earned her Ph.D. in Educational Administration from the University of Missouri-Columbia. Sandra also taught at the college level as an adjunct professor at Southwest Baptist University for a number of years. For many years, Sandra was an active member of the adult choir at First Baptist Church of Bolivar, Missouri and also a member of Kappa Kappa Iota Sorority, the Daughters of the American Revolution, the Polk County Library Board, and the Bolivar Community Choir as well as numerous professional organizations. Reading was her favorite spare-time hobby, although each spring she enjoyed ridding her yard of dandelions. Sandra was noted for her breadmaking, an art form that was enjoyed at many family gatherings. She loved to travel and made several visits to Europe and Asia as well as all 50 states, Canada and Mexico. In her later years, Sandra relocated to Marietta, Georgia to be near her daughter Donna. But she remained a Missouri girl at heart. Above all was Sandra’s love and commitment to her family. She is survived by her daughter Donna and husband Tim Hornbrook of Marietta, Georgia (granddaughters Abbey and Hannah), her son Richard and wife Carrisann of Branson, Missouri (grandchildren Marilyn, James, Clara, and Elisabeth Grace), one sister Linda (York) and husband Wayne York of Marshfield, Missouri, one brother James Allen York II and wife Shirel of Overland Park, Kansas, two aunts, and numerous nieces, nephews, cousins, friends, neighbors and colleagues. She looked forward to reuniting with her beloved dogs Molly and Suzi, who missed their mistress and the many walks they took together. A graveside service will be held at a later time at Crescent Hill Cemetery in Adrian, Missouri. “The moving finger writes; and, having writ, moves on; nor all your piety nor wit shall lure it back to cancel half a line, nor all your tears wash out a word of it.” -Omar Khayyam-

The family of Dr. Sandra June (York) Woods created this Life Tributes page to make it easy to share your memories.

Send flowers to the Woods family.