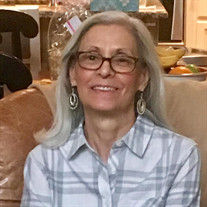 Sara Ann Wilkins, age, 70, passed away peacefully on June 25, 2020 due to complications from Alzheimer’s disease. She was born on November 11, 1949 in Welland, Ontario to Beni Bruno and Angela Monaco and was the youngest of three children. When she was six years old her family moved to Los Angeles, CA, where she attended Catholic School. After graduating from high school, she went to school and became a dental hygienist. Not long after that, she went to work as a receptionist at Foster and Kleiser, where she met William “Bill” Wilkins. They married on October 26, 1973. Sara and Bill had many adventures together, crisscrossing the country living in Las Vegas, Chicago, Norwalk, CT and finally moving to Roswell, GA in 1987. Together, they have one son, Daniel Wilkins. Sara was a devote Catholic, loving mother, and a devoted wife. She dedicated herself to her family and her faith. She enjoyed playing tennis, walking, cooking, was a voracious reader and had a soft spot for the Hallmark Channel. She always had a homecooked meal on the table and took pride in preparing meals to bring those she loved together around a table. One of her specialties was apple pie, which she made every year for Daniel on his birthday. Sara loved her grandchildren dearly and cherished her role as their “Nana”. Sara is survived by her husband, Bill; son, Daniel (Kristin); brother, Beni (Diane); granddaughters, Harper and Talia; niece, Barbara, and nephews, Chris and Wayne, as well as many cousins, stepchildren and grandchildren, and friends who loved her dearly. She was preceded in death her parents and brother, Philip. She will be greatly missed. The family asks that in lieu of flowers, please make a donation in Sara’s name to the Alzheimer’s Foundation of America (https://alzfdn.org) or the Alzheimer’s Society of Canada (www.alzheimer.ca).

Sara Ann Wilkins, age, 70, passed away peacefully on June 25, 2020 due to complications from Alzheimer&#8217;s disease. She was born on November 11, 1949 in Welland, Ontario to Beni Bruno and Angela Monaco and was the youngest of three children.... View Obituary & Service Information

The family of Mrs. Sara A. Wilkins created this Life Tributes page to make it easy to share your memories.