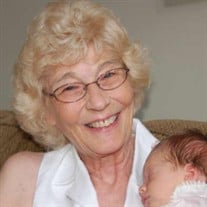 Shirley Patricia (Sampson) Wilson of Tucker, GA passed away peacefully on June 18, 2021 at the age of 87. She was preceded in death by her parents Alice Sampson and Mitchell T. Sampson of Thomasville, GA and by her husband of 54 years, Bobby E. Wilson. She is survived by her children Michael Wilson of Marietta, GA, Laura Mattox of Milton, GA, Andrew Wilson of Milton, GA, stepson Steve Wilson of McDonough, GA and seven grandchildren. Shirley was born in Pelham, Georgia in 1933. She attended Pelham Elementary, Middle and High School, graduating in 1952. She worked at Pelham Federal Savings and Loan as a bookkeeper for 7 years until she met and married her husband in 1962. They moved to Atlanta and lived in an attic apartment on Cascade Ave. before settling down in a small house on Woodrow Avenue in Hapeville, GA. All three of their children were born in Hapeville, but the family moved to Tucker, Georgia in 1972 and raised their children in that community. Shirley and Bobby both worked for Georgia Power in the company's downtown Atlanta offices until 1984 when the family moved to Augusta to support Bobby's new position at Plant Vogtle. Shirley and her family returned to Tucker in 1986 where their children finished high school and attended college in Atlanta, Statesboro and Boulder, CO. In 1997, Shirley and Bobby moved to Lawrenenceville, Georgia to be closer to their children. In retirement, Shirley loved spending time with her children and grandchildren, reading, and birdwatching. She enjoyed traveling and visited England, Italy, Germany and France several times with her children. She was an active member of the Georgia Power Ambassadors, Metro North chapter. Shirley was a kind-hearted soul who brought joy to everyone she encountered with her warm smile and gentle nature, and she will be deeply missed by her family and friends. The family will receive visitors at Northside Chapel in Crabapple, GA on Monday, June 28 from 6 pm to 8 pm. A memorial service will be held at the same location on Tuesday, June 29 at 3pm. The service will be livestreamed at https://www.facebook.com/Ncfhlive-111566940661816. In lieu of flowers, the family requests donations be made to Shirley’s favorite charities, the American Society for the Prevention of Cruelty to Animals (ASPCA) and the Alzheimer’s Foundation.

Shirley Patricia (Sampson) Wilson of Tucker, GA passed away peacefully on June 18, 2021 at the age of 87. She was preceded in death by her parents Alice Sampson and Mitchell T. Sampson of Thomasville, GA and by her husband of 54 years, Bobby... View Obituary & Service Information

The family of Mrs. Shirley P. Wilson created this Life Tributes page to make it easy to share your memories.

Send flowers to the Wilson family.