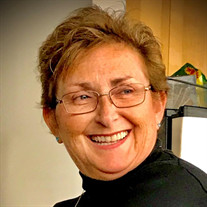 Susan Elaine (Scott) Childress, 61, of Alpharetta, Georgia passed away on February 19, 2022. She was the beloved wife of Glenn Paul Childress. Born January 1, 1961 in Baltimore, Maryland, she was the daughter of the late Thomas Bennett Scott and the late June Ann (Conn) Scott. Affectionately known as “Scottie,” she graduated from Arlington Baptist School in Baltimore, Maryland and went on to Cedarville University where she earned the Bachelor of Arts in Communications, Broadcasting (Radio and Television). Susan took her creativity to Maryland Public Broadcasting where she became an award winning Coordinating Producer for MotorWeek television series. Porsche Cars North America brought Susan and her family to Atlanta, Georgia to be a Product Publicity Specialist as well as the videographer and editor for Ferrari North America owners racing series. After stepping away from the fast pace of the automotive industry, she focused on mission work with the North American Mission Board and Leading the Way ministries. Most recently, Susan volunteered with the Patient and Family Advisory Council (PFAC) at WellStar North Fulton Hospital to help integrate the “voice” of patients and their family members in the hospital’s organizational decision-making. “Scottie” spread joy and laughter everyplace she went. Always creative, she could light up a room with her sharp sense of humor and compassionate warmth. She faced her challenges with a positive outlook and remained strong and steadfast, offering hope and encouragement to anyone facing the physical adversities of diminished mobility. Focusing her energy on photography, Susan became an expert at capturing the beautiful detail of nature and light, amassing a collection of photographs that will remind us of her eye for showing us the beauty and detail God’s creation. Susan Childress is survived by her husband Glenn Paul Childress and her daughter Rebecca Jane Childress of Alpharetta, GA, her brother Keith Conn Scott of Atlanta, GA as well as the loyal family dogs, Max, Maci and Dublin. The family will receive friends Tuesday, March 1 at 1:00 PM for visitation followed by a memorial service at 2:00 PM at Northside Chapel Funeral Directors and Crematory, 12050 Crabapple Road, Roswell, Georgia 30075 and a reception immediately following at the Childress home.

Susan Elaine (Scott) Childress, 61, of Alpharetta, Georgia passed away on February 19, 2022. She was the beloved wife of Glenn Paul Childress. Born January 1, 1961 in Baltimore, Maryland, she was the daughter of the late Thomas Bennett Scott... View Obituary & Service Information

The family of Mrs. Susan Elaine Childress created this Life Tributes page to make it easy to share your memories.

Send flowers to the Childress family.