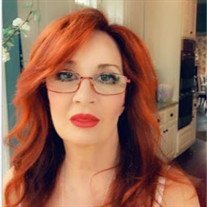 Teresa L. (Zummo) Humphrey, age 66 of Alpharetta, GA formerly of Dayton, OH, passed away Sunday, August 9, 2020. Teresa was the daughter of the late Ann Kuntz Zummo and Thomas Joseph Zummo of Dayton, Ohio. Teresa was an artist in all aspects of her life. She was a musical songbird, and both wrote lyrics and sang in the band Zummo in the early 80’s in Dayton. Her voice was strong and beautiful, truly powerful. She was an incredible empath, bringing solace to many who brought their difficulties in life to her. She listened intently; she gave good advice and believed in an afterlife for those who have passed on. She had a strong metaphysical belief and surrounded herself with beautiful crystals for physical healing, mental healing and emotional healing both for herself and others. She was a gentle soul who always led with Love and believed Love was the only answer. She practiced this every day of her life. She was preceded in death by her parents, her brother Taz Zummo, her son Demetrious Kilavos, her niece Amy Zummo. She is survived by her life-long partner and husband of 40 years, Steve Humphrey, her loving daughter Hayley Humphrey, sisters Meg Zummo & her husband Ken Reynolds, and Annie Zummo, her sister-in-laws Susan & her husband Jim Hackbarth, Michele and Bernadette Humphrey- Nicol, nieces Emily Zummo, Mia and Lilia Topalian, Ashley, Chrissy and Jamie Hackbarth and nephew Nicholas Bellanc as well as the bright light in her life, grandchildren Connor Jacob Kilavos and Kiera Kilavos. Memorial service will be 2PM, Saturday, August 22, 2020 in the chapel with visitation from 12PM to 2PM at Northside Chapel Funeral Directors and Crematory, 12050 Crabapple Road, Roswell, Georgia 30040. 770-645-1414. Please sign online guestbook at www.northsidechapel.com

The family of Teresa L. (Zummo) Humphrey created this Life Tributes page to make it easy to share your memories.

Send flowers to the Humphrey family.