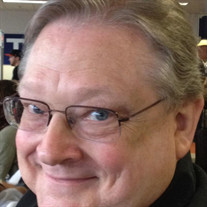 On Wednesday, September 15, 2021, Thomas Michael Barts (Bartosiewicz) loving husband passed away. He was at Northside Forsyth Hospital in Cumming, Georgia and passed from complications of a long-term illness, at 69 years old. He was originally from Chicago Illinois but had been in the Atlanta, Georgia area since 1980 and the Milton, Georgia area since 1992. Tom was a member of the Saint Thomas Aquinas Catholic Church. He was charming, funny, and smart. So smart! He was a graduate of Illinois Institute of Technology with an undergraduate degree in Mechanical and Aerospace Engineering and a Masters in Quantitative Methods. In addition to his brilliant analytical abilities, he was a wonderful musician, playing primarily by ear. And, he was the first one to laugh and the last one to stop. Tom started working for the Yacht club at 13 years old where he assisted boats in and out of their slips. He worked at a variety of jobs as a young man, but he was always working. Then he joined several bands, and helped pay for his college degrees Upon graduating, he gave up his long hair and hippy look to join a friend in his first consulting role. That followed with several consulting jobs and later programming. Tom was a brilliant engineer searching for the best processes, workspace layout, and overall layout of space. He continued this work both domestically and internationally. He loved making things better, faster, and easier. He simply loved making things better and easier. He contributed to his neighborhood by serving on the HOA in various roles for 10 years. Always patient and diplomatic, he got things done that a league couldn’t have accomplished. Tom was preceded by his parents, Stanley and Frances Barts and brother Richard Barts and sister Maria Barts. He is survived by his wife of 39 years, Judy Barts. Several cousins, sister and brothers-in-law, and nephews and nieces. Services will be at Saint Thomas Aquinas Catholic Church on Wednesday, Septmeb3er 22, 2021 at 2:00 p.m. Receiving time is 1:00 p.m. in the chapel. Private family internment. Those wishing may make donation to Saint Jude’s or Saint Thomas Aquinas Catholic Church.

The family of Mr. Thomas Michael Barts created this Life Tributes page to make it easy to share your memories.

Send flowers to the Barts family.