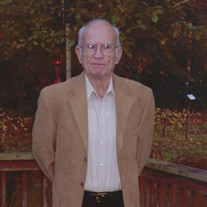 William (Billy) Shirley Bates, one of Alpharetta’s oldest merchants and most knowledgeable historians, died Friday, July 30, 2021, at his home in Alpharetta. He was 95 years old. Born on April 24, 1926, in Milton County Billy remained a lifelong resident of Alpharetta. He was a graduate and senior class president of Milton High School. He joined the U.S. Navy, served in the Pacific area during World War II, and was honorably discharged in 1945. After the war Mr. Bates returned to Alpharetta and became part of his family’s grocery business in the center of rural Alpharetta. In addition, in 1957, Mr. Bates joined the newly formed Alpharetta Volunteer Fire Department where he became a Captain and served for over 30 years. Bates and Wood Grocery served the surrounding community for well over 40 years. After closing the store in 1986, he pursued his many interests and became an expert in each: fishing, furniture building, rock and arrowhead hunting, beekeeping, vegetable farming. Yet, he will be most remembered for his devotion to preserving the history of the Alpharetta area and genealogy of its many families. He became involved in identifying and surveying old and abandoned cemeteries. Working with other local historians, he helped identify information on early residents of the community long before computers became a popular research tool for genealogy research. Mr. Bates provided valuable insight into what is called “Farm House” which many researchers agree is the sight of the original location of the City of Alpharetta. He led initial efforts and worked with community leaders in restoring our town’s historic log cabin which he helped build in 1935 as a member of the Future Farmers of America while attending Milton High School. He was active in starting the Alpharetta and Old Milton County Historical Society and served many years on the board as its historian. While history can be found in textbooks, to listen to someone like Billy Bates tell many stories of how his community grew and changed over the past 100 years, making Alpharetta no longer a little rural community but a thriving suburb of Atlanta is priceless. All his study, research, and documentation is being left for others to use and enjoy. On May 1, 2021, the Patriots of Liberty Chapter honored Mr. Bates with the Daughters of American Revolution Preservation Recognition Award. His wife of 44 years, Dorothy Sims Bates preceded him in death. He is survived by wife, Marjorie Moore Bates; son, William Bates of Ball Ground; two daughters, Shirley Bates Benton and Lynn Bates of Alpharetta; numerous grandchildren and great-grandchildren, nieces and nephews who will remember him with love. Friends and acquaintances will cherish their time spent with him. Visitation will be held from 1 – 4 p.m. Saturday, July 31 at Northside Chapel in Roswell. The funeral service will be held at Northside Chapel at 2 p.m. Sunday, August 1. In lieu of flowers, the family requests donations to the First Baptist Church of Alpharetta, Touch of Love Ministry, 44 Academy Street, Alpharetta, GA 30009.

The family of Mr. William "Billy" S. Bates created this Life Tributes page to make it easy to share your memories.

Send flowers to the Bates family.