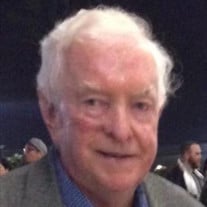 William (Bill) John Dempsey went Home to the Lord on November 26, 2021. Bill was born June 6,1931 to William and Louise Dempsey. Bill grew up in Rochester, New York, an only child, but surrounded by cousins, aunts, and uncles. He attended Aquinas High School and graduated from the University of Notre Dame in 1953 with a B.A in Economics. Upon graduation, Bill served in the Navy before returning to Rochester, New York. Soon after, Bill met the love of his life and future bride, Mary Ann McGrath Dempsey. They married in 1959 and had five children. Bill spent most of his career with Eastman Kodak. He loved to golf and will always be known for his great love of all things Notre Dame. Bill was a true man of God. He led retreats, served as a Eucharistic minister, and attended daily mass for as long as he could. It was no surprise to Bill’s family that he returned to the Lord Thanksgiving weekend, as he was a man of immense gratitude. Bill was predeceased by his parents William and Louise Dempsey and his wife Mary Ann. He is survived by his Children: William Dempsey Jr., Michael Dempsey (Beth), Kathleen Vesling (Rod), Karen MacDavid (Jake), Colleen Ristau (Chuck), Grandchildren: Tim, Peter (Evan), Lindsay (Paul), Stephanie (Luke), Alex, Tom, Jake, Mary Dee, Rachel, Evelyn, Ellie, Andrew D, Samantha, Andrew M, Lauren, Matthew, Cate and Great Grandson Carson. A memorial mass will be held on Monday, December 6 at 10:30 AM at St. Peter Chanel Catholic Church in Roswell, Georgia. “I have fought the good fight, I have finished the race, I have kept the faith. Now there is in store for me the crown of righteousness, which the Lord, the righteous Judge, will award to me on that day – and not only to me, but also all who have longed for His appearing.” 2 Timothy 4:7-8

William (Bill) John Dempsey went Home to the Lord on November 26, 2021. Bill was born June 6,1931 to William and Louise Dempsey. Bill grew up in Rochester, New York, an only child, but surrounded by cousins, aunts, and uncles. He attended... View Obituary & Service Information

The family of Mr. William John Dempsey created this Life Tributes page to make it easy to share your memories.

Send flowers to the Dempsey family.