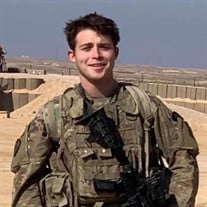 William Dennis Garvis, a beloved husband, father, son, and brother, died on February 27, 2021 at the age of 24. He was a Corporal in the United States Army. Will is survived by his loving wife, Paola Gonzalez; their 11 month old son William Dennis Jr. (Bubbas); his parents Betsy and Bill; his brothers Sam and Ben; his grandfather Dennis, grandmother Joey and many uncles, aunts, and cousins. He is preceded in death by his grandmother Nan and his grandfather Paul. Will was born in Dallas, Texas on September 15, 1996 to Betsy and Bill Garvis. He joined the Army in the Spring of 2018 where he excelled in basic training at Ft. Benning. He was then stationed at Fort Wainwright in Fairbanks, Alaska. Will achieved much success in the Army, earning several honors and medals, including Army Commendation Medal, Army Achievement medal with Commendation, Army Good Conduct Medal, National Defense Service Medal, Inherent Resolve Campaign Medal with Campaign Star, Global War on Terrorism Service Medal, and the Army Service Medal. Will ultimately earned the rank of Corporal. His Army Unit brothers, said Will would “accept everyone without agenda”, and “was the jokester of the Unit”. He kept everyone’s spirits high during their tour in Iraq. After his tour and the birth of his son Will Jr., Will was excited to spend time with his family. Paola and Will were finalizing their plans to return to Georgia. Upon his return to Georgia, Will was planning to join the Army Reserves and finish his college degree. Will truly loved life and especially Paola and his little Bubbas. A funeral service is scheduled for 11:00am on Monday, March 22nd at St. Peter Chanel Catholic Church at 11330 Woodstock Rd., Roswell, GA 30075. A visitation is scheduled for Sunday, March 21st at Northside Chapel at 12050 Crabapple Rd., Roswell, GA 30075. As there are only 25 people allowed in Northside Chapel at a time (COVID reasons), we will have two visitations on Sunday at 2:00-4:00pm and 5:00-7:00pm. In lieu of flowers, a 529 education fund has been established for baby Will. Should friends desire, contributions may be sent via Venmo @babywillfund or via Paypal – [email protected]

William Dennis Garvis, a beloved husband, father, son, and brother, died on February 27, 2021 at the age of 24. He was a Corporal in the United States Army. Will is survived by his loving wife, Paola Gonzalez; their 11 month old son William... View Obituary & Service Information

The family of William D. Garvis created this Life Tributes page to make it easy to share your memories.