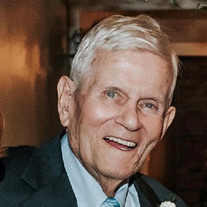 “Because I could not stop for Death He kindly stopped for me – The Carriage held but just Ourselves— And Immortality.” -- Emily Dickinson On November 6, 2020, Death kindly stopped for William Edward Goodwin Halbert in Roswell, Georgia. “Bill” was born on March 3, 1931 in Lexington, Kentucky the second child of Marie Goodwin Halbert and Burt V. Halbert, Jr. After graduation from Lafayette High School in 1949, he enlisted in the United States Air Force. He attended basic training in San Antonio, where he became a medic, and was stationed at Ramstein Air Base in Germany flying Medavac planes and transporting patients between England and Germany. He was proud to tell people that he was in London on the day of Queen Elizabeth II’s Coronation. After serving in the U.S. Air Force, he enlisted in the University of Kentucky where in 1958 he was awarded a Bachelor of Science in Commerce Degree. He then began a long career in sales traveling through several states before settling in Atlanta, Georgia in 1964. Bill will be remembered for his good nature, good humor, love of family, food, and funny jokes. He is survived by his wife of 33 years Margaret Rose Heinisch, son Stuart, daughter Lucy Lety (Jim) son David and stepson Michael Heinisch (Laura) three grandchildren, Sally Sundbeck Colbert (Jacob) Sam Sundbeck and Kimberly Keiko Halbert; four step-grandchildren, Victoria Louise Heinisch, Eleanor Mae Heinisch, Kate Lety and Abigayle Lety and many nieces and nephews. He was pre-deceased by his former wife Sally Ellen, son William Halbert II, and daughter-in-law Cathleen Halbert. Internment will be at the Georgia National Cemetery, and a Celebration of Bill’s Life will be held at a future date. In lieu of flowers, donations can be made to the Stephen Siller Tunnel to Towers.org. Arrangements made by Northside Chapel in Roswell.

&#8220;Because I could not stop for Death He kindly stopped for me &#8211; The Carriage held but just Ourselves&#8212; And Immortality.&#8221; -- Emily Dickinson On November 6, 2020, Death kindly stopped for William Edward Goodwin Halbert... View Obituary & Service Information

The family of Mr. William Edward Goodman Halbert created this Life Tributes page to make it easy to share your memories.

“Because I could not stop for Death
He kindly stopped for me...

Send flowers to the Halbert family.