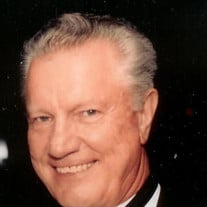 Troy Holman passed away peacefully on August 2, 2020 at the age of 86. He was born on August 22, 1933 in Provo, KY to the late William Holman and Bernice Irene (Lee) Holman. Survivors include his brother, Jim (Melba) Holman – Provo, KY; two daughters, Denise Holman – Roswell, GA, and Diane (Dennis) French – Alpharetta, GA; two sons, Stephen Holman – Nashville, TN, and Eric (Eileen) Holman – Acworth, GA. Four Grandchildren, Daniel (Jesika) French – Brookhaven, GA; Jennifer (Brett) Perkins – Roswell, GA; Garrett and Chandler Holman – Acworth, GA. Two Great-Grandchildren, Owen Perkins - Roswell, GA, and Eleanor French – Brookhaven, GA. He is preceded in death by his wife Eleanor Holman in 2014, his daughter Benita Sue Holman at birth in 1960, and his brother Gordon Holman – Provo, KY in 1980. Troy and Eleanor were married on July 17, 1955. He and his family moved to Nashville, TN until his company, Western Electric, transferred him to Atlanta. They resided in Decatur, GA until September 1970 when they moved to Roswell, GA. The family joined the First Baptist Church of Roswell in 1971. He was elected as a deacon of the church. Troy and Eleanor taught the 2- and 3-year-old Sunday School class for 19 years. Afterwards, they joined the Faithful Friends Sunday School Class. Troy enjoyed his involvement in the Roswell community. He helped with the organization of the Roswell Recycle Center. He was also a member of the Roswell Lions Club. During his membership, he was a Melvin Jones recipient and was honored with a Lifetime Achievement Award in 2017. He was an “avid” Kentucky Wildcat fan of both their basketball and football teams. His other interests included golf; working out at the gym; volunteering at the voting polls; watching the Braves play and various other sporting events; and visiting with family and friends. In lieu of flowers, the family respectfully request that contributions be directed to the National Foundation for Cancer Research https://nfcr.org/ in memory of him. A private family graveside service will be held on Friday, August 7th.

Troy Holman passed away peacefully on August 2, 2020 at the age of 86. He was born on August 22, 1933 in Provo, KY to the late William Holman and Bernice Irene (Lee) Holman. Survivors include his brother, Jim (Melba) Holman &#8211; Provo,... View Obituary & Service Information

The family of Mr. William Troy Holman created this Life Tributes page to make it easy to share your memories.

Send flowers to the Holman family.