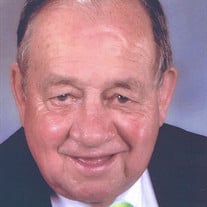 William Lee Van Hout, Sr (Bill) age 79 passed away on May 1, 2021. Bill was a member of St. Ann&#8217;s Catholic Church in Roswell, GA. He graduated from Marquette University with his Bachelor of Engineering as a Mechanical Engineer. Bill... View Obituary & Service Information

The family of Mr. William Lee Van Hout Sr. created this Life Tributes page to make it easy to share your memories.