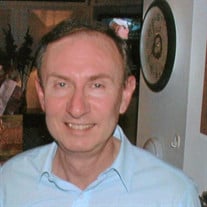 Family and Friends, Thank you all so much for joining me to bid farewell to my dear Andrea. My spouse, my life companion, my best friend of 44 years. This is not a normal setting for a eulogy, but these are not normal times. Andrea died... View Obituary & Service Information

The family of Mr. Andrea di Montegnacco / Nicholson created this Life Tributes page to make it easy to share your memories.

Thank you all so much for joining me to...