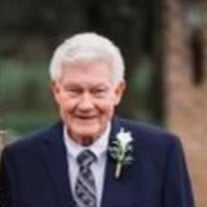 Andy was born in Tuscaloosa, Alabama to Helen Bridget and William McGuffey Hepburn, the youngest of six children. His father’s deanship at Emory University law school brought the Hepburn family to Atlanta in the 1950s. Andy attended Marist High School, then college, beginning at Notre Dame and finishing at Georgia Tech where he obtained a degree in mechanical engineering. Andy and Alice met through friends and family and married in June of 1962. The US Army Corp of Engineers moved Andy, Alice and first son Andy Jr. to Karlsruhe, Germany where second son Tim was born. After completing his military service Andy worked for Pratt and Whitney aircraft while earning his Master’s degree at University of Connecticut. A new job with IBM returned the family home to Atlanta, where a third son, Dan, completed the Hepburn family. Andy retired from IBM after 26 years, and then started a home inspections business, which he ran for a decade. Andy is survived by his wife of 59 years, Alice Rock Keiley, and too many of the Keiley and Hepburn clans to number. He is also survived by his children: Andy Jr. (Cassondra Kennedy), Fr. Tim (Saint Michael Parish, Gainesville), and Dan (Shannon McPipkin); and his grandchildren: Samuel McGuffey (Anna Sullivan), Benjamin Philip, Abigail Alice, Wyatt Jackson, Davis Moore, and Timothy Mac. A funeral Mass will be celebrated at Saint Jude the Apostle Catholic Church on Friday, May 21 at 10am. Interment will be at Georgia National Cemetery at a later date. In lieu of flowers please donate to the Saint Vincent de Paul Society either directly at svdpgeorgia.org, where you may dedicate your gift in memory of Andy Hepburn, or send checks to 2050-C Chamblee Tucker Road, Atlanta, GA 30341.

The family of Mr. Andrew Moore Hepburn created this Life Tributes page to make it easy to share your memories.

Andy was born in Tuscaloosa, Alabama to Helen Bridget and William...

Send flowers to the Hepburn family.