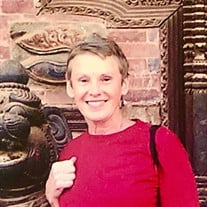 January 31, 2021, Anne White passed suddenly from this life after a long battle with dementia. Born in Alexandria, VA on April 11, 1943 to Ralph Coles White and Louise Dotson White where they were stationed during World War II, Anne was a delightful addition to their family. After the war, the family moved to TN to her father’s hometown where her father’s family still resided. Anne, at that time, had two siblings, Evelyn and James, and soon Susie would join the lively bunch. Anne spent her childhood exploring the woods and countryside with friends and family surrounding her. Anne attended Hornbeak Elementary School and High School where she graduated in 1961 with Highest Honors as Valedictorian of her class. She continued her education at the University of Tennessee Knoxville and graduated with Honors in 1965 with a BS in Biology. Moving to Atlanta, she started teaching in high school in the DeKalb County public school system and continued her education later at Notre Dame and completed her Masters degree at the University of Virginia in Charlottesville, VA. Returning to Atlanta from VA, Anne began working for Atlanta Educational Television writing and producing Science Instruction for high school teachers. She then had an opportunity to work for the Georgia State Department of Education and ultimately became Associate Director of the Professional Practices Commission for the state of Georgia where she won many awards for her work there. After her retirement, having always had a passion for travel, she began her many journeys around the world, traveling to six continents where she explored many cultures, and at times, lived among the people that she met. Anne loved immersing herself in different cultures, and made many friends along the way. Anne also had a love for animals, wildlife in particular, and was a member of the Sierra Club and other Wildlife Preservation organizations. She was an avid reader and continued to pursue her love of learning until her illness prevented her from it. Anne was preceded in death by her sister, Evelyn Shankle, (George), San Angelo, TX and leaves behind her brother, Dr. James White, Tuscaloosa, AL and sister Susan (Susie) Chase, (Michael), Jackson, TN and her beloved nieces and nephews and many dear and beloved friends. In lieu of flowers, if you so choose, donate in Anne’s memory to the charity of your choice that supports Environmental Preservation leading to Wildlife protection or Public Broadcasting. A full celebration to honor Anne’s life will be held at a later date when friends and family can gather safely.

January 31, 2021, Anne White passed suddenly from this life after a long battle with dementia. Born in Alexandria, VA on April 11, 1943 to Ralph Coles White and Louise Dotson White where they were stationed during World War II, Anne was a delightful... View Obituary & Service Information

The family of Ms. Anne White created this Life Tributes page to make it easy to share your memories.

Send flowers to the White family.