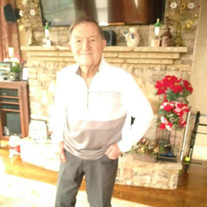 Doctor Armand A. DeLaPerriere passed away Monday, October 11, after a lengthy illness. He was 83 years old, and died at home, surrounded by family and friends. He was a resident of Milton, GA. Friends and family will join in celebration of Dr. DeLaPerriere’s life at a memorial service to be held Saturday, October 16, at Northside Chapel in Roswell, GA. The service will start at 2pm. Dr. DeLaPerriere is the son of Herman and Reba DeLaPerriere who, along with his brother Herman, preceded him in death. Dr. DeLaPerriere was only 13 years old when his father passed away. He and his mother moved to Commerce, GA to begin a new life. Dr. DeLaPerriere attended Commerce High School where he was President of his class and captain of the football team. While in Commerce, Dr. DeLaPerriere ran the soda fountain at Commerce Drug Company. One August day in 1954 a pretty girl named Bess Chandler came in for a soda. Armand asked her for a date and they married in August of 1959, five years to the day after meeting. Upon graduating high school in 1956, he attended pre-med classes at the University of Georgia. Upon completing pre-med studies in 1959, he entered the Medical College of Georgia and graduated in 1963. Dr. DeLaPerriere did his internship and residency as an Army doctor stationed in Hawaii and retired with the rank of Major. All 3 children were born in Hawaii. In addition to managing his medical practice in Atlanta, Dr. DeLaPerriere became a successful race horse owner and breeder and was twice named Breeder of the Year in GA. He was an avid golfer, skier, hunter, cattle farmer, fisherman, traveler, sailor, and companion to Bess and their children. Dr. DeLaPerriere is survived by his children, Preston, Darren, and Beth, and grandchildren, Elise, Lauren, Amanda, Paige, Lydia, Molly, and Joey. He is also survived by his two cherished daughters-in-law, Kelly and Fran, and his son-in-law Chris Davis. In lieu of flowers, donations may be made to the American Cancer Society or Cure Alzheimer's Fund.

Doctor Armand A. DeLaPerriere passed away Monday, October 11, after a lengthy illness. He was 83 years old, and died at home, surrounded by family and friends. He was a resident of Milton, GA. Friends and family will join in celebration of... View Obituary & Service Information

The family of Dr. Armand A. De La Perriere created this Life Tributes page to make it easy to share your memories.