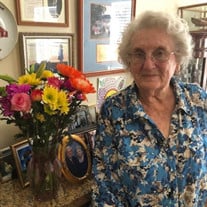 Betty Dolores Henderson, 92, of Alpharetta, GA, passed peacefully April 8, 2021. Betty was born in the Holbrook community north of Alpharetta on September 22, 1928 to parents, Edd and Kathleen Westbrook. She attended Milton High School and after graduation, attended trade school for bookkeeping. Following school, she was married to Joe Howard, who passed suddenly one year later in 1955. Betty later remarried to Berry Henderson in 1957, who at that time was widowed with two children, John and Rebecca. Together they had their youngest son, Mark, who was born to them in 1960. They were happily married for over 45 years and served the Lord through pastoral ministry to many local churches in Georgia until Berry's death in 2003. Betty was a faithful member of Mt. Zion Baptist Church in Hickory Flat, GA. Mt. Zion held a special place in her heart for its ministry and its members. Betty also loved attending camp meeting at Holbrook campground each year- without missing for 91 years. Betty is survived by her son, Mark Henderson; his son, Adam; his wife, Gina, and their children, Kathleen and Ian, of Alpharetta, GA. She is also survived by daughter-in-law, Denise Henderson, and grandson, Chase Henderson, of Port Orange, FL; son-in-law, Jim Sloan of Birmingham, AL, and her grandson, Joel Sloan, married to Rosalyn, and their two children, Corryn and Aubrey; as well as grandson Ben's son, her great grandson, Noah. Betty was preceded in death by her first husband, Joe Howard; her husband, Berry Henderson; her stepchildren, Rebecca Sloan and John Henderson, and grandson, Ben Sloan. Funeral arrangements will be at Northside Chapel in Roswell, GA on April 16, 2021. The family will receive guests beginning at 11am and a chapel service will be held at the funeral home at 1pm. Interment will be at Green Lawn Cemetery in Roswell, GA immediately following.

The family of Mrs. Betty Henderson created this Life Tributes page to make it easy to share your memories.

Send flowers to the Henderson family.