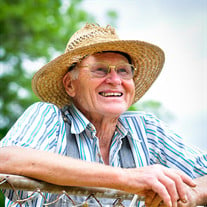 In lieu of flowers the family is requesting donations to the Alzheimer's Association. Billy Vernon Albertson, age 89, March 31, 1932 - August 14, 2021 A life well lived... Billy was the son of Egbert and Ola Bell Albertson and the 10th out of 11 children. He had a great love for his family. They lived as sharecroppers mostly in North Fulton County (formally Milton County) and moved around a lot. They sometimes lived in old drafty houses, but there was plenty of love and warmth to go around. They did not have much money, but they were rich in all the ways that mattered. He was the last of this generation. He went to school in the Crabapple community. He completed a 7th grade education at Northwestern Elementary School. Afterwards, he attended Milton High School in Alpharetta until he turned 16, then he went to work full time. He held many jobs: sawmilling, road work, construction work to name a few. He settled on meat cutting and made a living as a butcher most of his life. In 1955, Billy married the love of his life, Marjorie Mary Cornelison and built a home in 1960 on Hardscrabble Road where they lived all but five years of their married life. He continued a simple life of farming with her. For 25 years he milked a cow, they raised chickens, pigs, rabbits and grew a garden every year. Their beautiful life was interrupted by Marjorie’s diagnosis with Alzhemier’s disease. Billy eventually retired from meat cutting to care for his wife until her death in 2008. He would always say they had 52 years and two months of marriage together. In his later years, Billy raised herds of goats, sold eggs and of course, the vegetables from his garden every year. Those who drove along Hardscrabble Road will remember his simple handwritten ‘for sale’ signs, the money barrel and the honor system he set up. His system attracted folks from all around the world to stop in. He never met a stranger and his simple life was inspiring to so many. There were two books written about him, a TV news segment shown in prime time and dozens of newspaper and magazine articles as well as interviews on radio shows. People were also inspired to paint, draw sketches, write poems and take thousands of photos of him and his little strip of land. Billy was a long time member and Deacon of Mt. Oliver Baptist Church in Roswell. He was an active member of Alpharetta Lodge #235 since 1955. He helped build the current building where the lodge is located in 1974. He served as Worshipful Master in 1974 and 2001. Afterwards, he served as Chapter Chaplain until he was no longer able to attend regularly. He was named Mason of the Year for the 5th Masonic District which includes Fulton, DeKalb, Douglas and Rockdale Counties. Billy was initiated 3/26/2010 into Alpharetta Eastern Star Chapter and served as Worthy Patron three times. Billy is survived by his two daughters, Janet Albertson Bobeng and husband, Greg Bobeng and Denise Albertson Huntley, two grandchildren, Matthew Bobeng and Kristen Bobeng Norwood and husband, Devon Norwood, and Billy’s “little buddy” great grandson, Jensen Norwood. He is also survived by many beloved nieces and nephews, great nieces and nephews and great great nieces and nephews. Funeral service will be held Sunday, August 29th, 1pm, outside at Mt. Oliver Baptist Church, 735 Hardscrabble Road, Roswell 30075. Graveside service will follow at 3pm at GreenLawn Cemetery, 10993 Alpharetta Hwy, Roswell, 30076. Family will hold visitation prior to the time of services, Saturday, August 28th, 4-7pm and Sunday, August 29th Noon-1pm, outside Mt. Oliver Baptist Church. In lieu of flowers the family is requesting donations to the Alzheimer's Association.

In lieu of flowers the family is requesting donations to the Alzheimer's Association. Billy Vernon Albertson, age 89, March 31, 1932 - August 14, 2021 A life well lived... Billy was the son of Egbert and Ola Bell Albertson and the 10th out... View Obituary & Service Information

The family of Mr. Billy Albertson created this Life Tributes page to make it easy to share your memories.

In lieu of flowers the family is requesting donations to the...