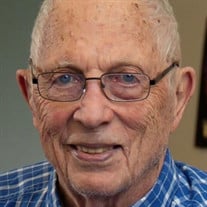 Another beloved member of the 20th century’s ‘greatest generation’ left this Earth on Aug 5, 2020. Bruce Erwin Franklin, 95, of Roswell, Georgia passed away peacefully at home with his family by his side. He was born Aug 31, 1924 in Crossnore, North Carolina to Rev. Christopher McCoy Franklin and Mary Alice Steenrod. As a young boy, he moved to Tennessee, first to Farner then Madisonville. Bruce graduated from Madisonville High School where he played football and during World War II Bruce joined the Navy. After the war, he earned his college degree with a B.A. in Public Administration from the University of Tennessee in 1948. In 1950, Bruce was called back to the Navy for the Korean War, and remained in the reserves for many years. In Madisonville in 1951, he met and married the home economics agent and love of his life, Ola Mae White. They had three children together. Bruce had a 30 year career as a Human Resources Executive at Union Carbide, bringing his family with him throughout the country, ending his career in Connecticut. In retirement, he and Mae loved to spend time at their home in Stuart, Florida and travel back to Connecticut and throughout the world. Bruce was proud to have visited all 50 states and he and his family lived in over 10 of them including TX, CA, WV, CT, and IN. He was an active member of Presbyterian churches throughout his entire life, as expected from any PK (Preacher’s Kid), and most recently was a member of Northminster Presbyterian Church in Roswell, GA. Bruce was a man of many talents. He loved history, western movies, and spending time with his family, especially his grandchildren. He would entertain them with stories and bird calls he learned from his mountaineer father. He was especially proud of his father, who had emerged from the NC mountains at the age of 21 with a 1st grade education to achieve a college degree at Berea College (KY). His talent as a storyteller and pride in his family eventually led to his book, Papa’s Stories: Confessions of a Preacher’s Son . His book is dedicated to all of his family. He was also a skilled rose gardener, story teller, constant whistler, a poet, and a Michener and Zane Grey fan. He had a lifelong fondness of good cooking, especially Mae’s fried chicken. He loved tennis, and played weekly until his 90th birthday. Bruce had a generous heart and was a great listener. He will be deeply missed by all who knew and loved him. Bruce was met in heaven by his parents, his wife, his sisters Mayme and Alice, and his childhood pony, Pet. He is survived by his three children: Bruce (Sharon) Franklin, Cathy (Jim) Intravia, and Jeanne (Bob) Patterson as well as his seven grandchildren Alissa (Matt), Lauren, Jessica, John, Chris, Michael (Melissa), and Leah (Austin), and four great-grandchildren. Bruce is also survived by his siblings Doug, Roberta, Mac (Betty), and McCoy. This obituary would be incomplete without the words of Bruce himself. In his unpublished second novel, he wrote “As I recount the events which influenced my life, I must give credit to the greatest influence of all: the impact of my wife, children and grandchildren. They gave me happiness, joy, purpose, and a reason for being. I look back through my rearview mirror and think of the many people and events that came together to make up my life. I am forever thankful to my Creator for placing me at this time, in this place. I have had a wonderful life.” A private family interment will be held at Haven Hill Memorial Gardens in Madisonville, TN. Those wishing to make donations in his memory may do so to Northminster Presbyterian Church ( www.npc.life ) 2400 Old Alabama Rd, Roswell GA 30076 or to his favorite charity, St. Jude’s Children’s Hospital (stjude.org).

The family of Mr. Bruce Erwin Franklin created this Life Tributes page to make it easy to share your memories.

Another beloved member of the 20th century’s ‘greatest generation’...

Send flowers to the Franklin family.