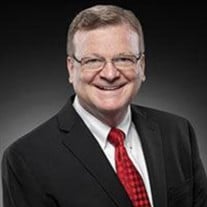 Charles Sammy Thomas (Sam), 71, of Alpharetta, GA, passed away on August 24, 2021 after a battle with melanoma. Sam was born on February 20, 1950 in Decatur, GA to Luther and Lela Thomas. After graduating from Stone Mountain High School in 1968, he attended Georgia State University, B.B.A., 1972, with honors and the University of Georgia, 1975, J.D., cum laude. He joined the law firm Bovis, Kyle, Burch and Medlin of Atlanta in 1975 and served as the City Attorney for the City of Alpharetta from 1985 until his death. Sam had a great passion for municipal law and development. During his service to the City of Alpharetta, he authored code that became the standard for development impact fee structures for much of the southeast. In the past decade, he took great pride in the construction of the new Alpharetta downtown area and the Avalon development. In 1977, he married Dale Thomas of Atlanta, Georgia and had three children, Jared, Laura and Joseph. Sam was a wonderful grandfather and doted on his three grandchildren, Paige, Michael and Anders. Sam was active in his community and had served as a board member of the Alpharetta Softball Association and the Alpharetta Convention and Visitors Bureau. He served a term as the president of the Greater Atlanta Christian School Booster Club. He loved the Georgia Bulldogs. Sam is preceded in death by his parents and his siblings, William Luther, Juanita, and Frances. He is survived by his wife Dale; his three children, Jared (Jennifer) of Atlanta, Laura (Bert) of Roswell and Joseph of Atlanta and his three grandchildren; siblings Beverly and Marguerite. A memorial service will be held on Friday, August 27 at 1PM at Northside Chapel Funeral Directors. The family will receive friends on Friday from 12:30PM to 1PM. In lieu of flowers, please consider a donation to the Samaritan’s Purse International Relief Fund. www.samaritanspurse.com

Charles Sammy Thomas (Sam), 71, of Alpharetta, GA, passed away on August 24, 2021 after a battle with melanoma. Sam was born on February 20, 1950 in Decatur, GA to Luther and Lela Thomas. After graduating from Stone Mountain High School in... View Obituary & Service Information

The family of Mr. Charles Sammy Thomas created this Life Tributes page to make it easy to share your memories.

Send flowers to the Thomas family.