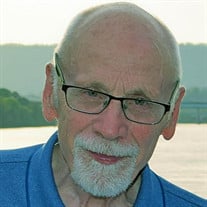 David Wright age 77 of Roswell passed away on May 25, 2021. He was preceded in death by his parents, Cyril and Winifred Everitt Wright and sister, Valerie Wright. He is survived by his loving wife of 50 years, Barbara Wright, three sons and daughters-in-law, Jeff and Marcella Wright, Dan and Amy Wright and Mike and Courtney Wright; grandchildren, Macy, Jake, Christian, Savannah and Wyatt Wright; sister, Iris Amadon along with other extended family. David was born and raised in England where he honed his dry sense of humor, love of family and close friends. He developed a strong connection to any underdog while rooting for his boyhood football (soccer) club, Brentford. He followed his strong scientific aptitude to the University of Hull where he earned a PhD in Chemistry. After graduation he traveled to the US to conduct research at the University of Buffalo where he met the love of his life, Barbara Walker. They wed in 1970 and moved to England where Barbara became more familiar with English culture. After the arrival of their first child, they returned to the US where David worked multiple jobs before finally relocating to Wilton New Hampshire where they lived for 17 years and raised their family. Small town New England life suited Dave and his family and they had no plans on ever leaving, however God had other plans. In 1993, Dave changed jobs to work with a long time friend in Alpharetta Georgia. Dave and Barb have lived in the same house since Thanksgiving of 1993. Dave fully retired in 2015, after having retired and unretiring a couple times. Since then they have enjoyed working around the house, particularly out in the yard. Retirement has allowed them to spend a lot of quality time with each other, starting most days with a leisurely breakfast on the back porch where they enjoyed coffee, tea and a nice cribbage match before deciding what project they would take on that day. Spending time with their sons and grandchildren brought Dave a lot of pride and joy, with him enjoying Jake's graduation from high school this past weekend. Dave will be remembered for his big smile, warm heart, and quirky sense of humor. A memorial mass will be held Wednesday June 2, 2021 at 11 am at St. Ann Catholic Church. In lieu of flowers, the family requests that donations be made in David’s memory to two of his favorite charities to Habitat for Humanity or MUST Ministries.

David Wright age 77 of Roswell passed away on May 25, 2021. He was preceded in death by his parents, Cyril and Winifred Everitt Wright and sister, Valerie Wright. He is survived by his loving wife of 50 years, Barbara Wright, three sons and... View Obituary & Service Information

The family of Mr. David Wright created this Life Tributes page to make it easy to share your memories.

Send flowers to the Wright family.