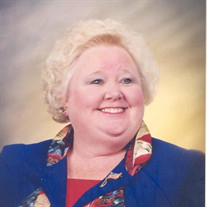 Donna Leigh Reynolds of Opelika, AL passed away September 26, 2020 in Sandy Springs, GA at the age of 69. Donna was born and raised in Montgomery, AL and was a graduate of Sidney Lanier High School. She loved her years as a Poet and was very involved as the principal organizer of all the Class of ’69 Reunions even as recently as 2019 for their 40th Reunion. Donna finally graduated from Troy State University in 1986 with a Bachelor of Science in Journalism. As a TSU student she was known for making hundreds of spirit signs that she put up before each home game and many away games. She also provided signs for the “Sound of the South” Marching Band when they appeared on national TV in Atlanta, New Orleans and Miami. She was the first female and first student to be named an “honorary lifetime member” of the Sound of the South Band in 1971. Donna also was instrumental in the organization of the Sound of the South Alumni Band. She helped Tau Beta Sigma music service fraternity organize the alumni band. Donna was also involved with Phi Mu Alpha, where she received their highest honor – the Orpheus Award. She was also a Patroness for Sigma Alpha Iota music fraternity for women. Donna was well known for her singing at TSU. She sang for just about everything on campus and for any event. Many nights you could hear her voice echoing across campus as she sang in Kilby Hall courtyard perched in her favorite archway with her guitar. Donna also shared her gift of song in church services and in concerts in more than 38 states in the US and in parts of Canada. She also sang in more than 600 weddings. Donna’s love of music expanded into working Christian concerts with His Voice Ministries. She loved working the Gaither Homecoming concerts as well as concerts for Wayne Watson, Sandi Patti, 4 Him, Ray Boltz, NewSong, Jackie Valesquez, Jonathan Pierce and many others. This is where her love of catering began and allowed so many to benefit from her amazing catering skills. Donna loved her college football and held season tickets to Auburn University and Troy State football for many many years and attended almost every game possible. She loved God and was very involved with her churches. First Baptist Opelika held a special place in her heart and made the biggest impact on her life. She was involved in the student ministry, served as a wedding coordinator, and loved Sunday School, the music ministry and adult choir. Donna came to Auburn in 1990 as an editor with the Alabama Cooperative Extension System. She retired from Auburn University in May 2019 after almost 30 years of service. Prior to Auburn, she worked 13 years in University Relations at Troy State University and 2 years at the Alabama Baptist State Convention in Montgomery. She is preceded in death by her parents, Carden Wilson Reynolds and Helen Dees Reynolds and her brother in law, Don White. She is survived by her sister, Candace White of Roswell, GA and her brother, Jerry Reynolds (Norma) of Arizona, one nephew, JJ White (Erika) of Hull, GA, 4 nieces, Angela Hollander (Ross) of Lawrenceville, GA, Tina Folsom (Chris) of Helena, AL, Leah Godwin (Keith), Greenville, AL, and Regina Stevens of Maylene, AL, 17 great nieces and nephews and 8 great great nieces and nephews. She also leaves her 2 special dogs, Gracie and Sassy, which were like her children. Donna’s memorial service will be held at 1 pm on Saturday, Oct 17, 2020 in the sanctuary of First Baptist Church of Opelika. Family and friends will meet outside of the sanctuary after the service for a time of sharing. Protective masks are requested. A tree has been planted in the Quad near the Sound of the South walk in memory of Donna. A plaque will be placed on Saturday, Oct 24, 2020 at 10:00 am and all who wish to share their experiences and love of Donna will be welcomed for a meet and greet. Bring a lawn chair. In lieu of flowers, the family requests any memorial donations be made to FBC, Opelika at https://www.fbcopelika.com/give or to Sound of the South Band at Troy State University.

Donna Leigh Reynolds of Opelika, AL passed away September 26, 2020 in Sandy Springs, GA at the age of 69. Donna was born and raised in Montgomery, AL and was a graduate of Sidney Lanier High School. She loved her years as a Poet and was very... View Obituary & Service Information

The family of Ms. Donna Leigh Reynolds created this Life Tributes page to make it easy to share your memories.

Send flowers to the Reynolds family.