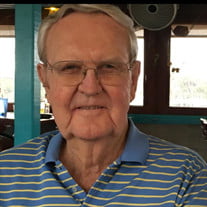 Duane Hetland, age 86, died peacefully at home on February 1, 2021. He was surrounded by his beloved wife, Joan, their four children Veronica, Richard, Rebecca and Scott, their son-in-law Frank, and loving caregivers Mariatu and Abdulai. When... View Obituary & Service Information

The family of Mr. Duane E. Hetland created this Life Tributes page to make it easy to share your memories.

Send flowers to the Hetland family.