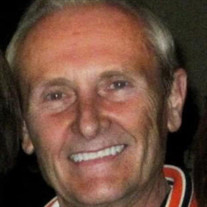 Dwayne Anderson Brewer of Marietta passed away on November 17, 2021, at the age of 74. Dwayne was born in Birmingham, Al and spent most of his childhood there. He also enjoyed many summers in Cullman, Alabama with his paternal grandparents. He grew up a Southern Baptist and loved singing in the choir throughout his life. Dwayne graduated from Auburn University where he was a member of the Lamba Chi fraternity. He was given the nickname, “Go-Go”, by his fraternity brothers because he never seemed to stop dancing. He was also voted “Best Brother” due to his humor, kindness, and ability to make all around him feel comfortable. Dwayne continued to be a “die-hard” Auburn football fan and always loved watching Auburn play, especially when they were playing well! His first job after college was as a high school Biology teacher and football coach. Dwayne often said he kept his students on “their toes” by teaching with humor. He transitioned from coaching/teaching into sales and spent most of his career in the insurance industry with Blue Cross/Blue Shield. It was there that he met his wife, Katie Rowe. Dwayne often told Katie it was “love at first sight” and that he knew when they first met that he was going to marry her. Dwayne was a good and kindhearted man who will be remembered for his great sense of humor, his “laid back attitude” and the way he always made people feel at ease. He was a devoted husband and son-in-law, and a loving father. Dwayne is survived by his wife, Catherine Hollis Brewer (Katie Rowe); daughter, Glynn; sons, Hollis and Hayes; mother-in-law, Carolyn Hollis; brother, David (Linda) Brewer; and sister, Frances Brewer. A service of celebration and remembrance will be held on Monday, November 22 at 11:00 am in the Chapel of Roswell United Methodist Church. Visitation will be immediately following the service. In lieu of flowers, memorials may be made to the Carol H. Baumgartner Family Endowment at Roswell United Methodist Church. Carol was Dwayne’s sister-in-law and had a passion for caregiving and service. The endowment provides support and assistance to family caregivers as well as to patients requiring assistance with special services. Donations may be sent to: Roswell United Methodist Church Attn: Carol H Baumgartner Family Endowment 814 Mimosa Blvd. Roswell, Ga 30075 https://Rumc.onlinegiving.org/donate

Dwayne Anderson Brewer of Marietta passed away on November 17, 2021, at the age of 74. Dwayne was born in Birmingham, Al and spent most of his childhood there. He also enjoyed many summers in Cullman, Alabama with his paternal grandparents.... View Obituary & Service Information

The family of Mr. Dwayne A. Brewer created this Life Tributes page to make it easy to share your memories.

Dwayne Anderson Brewer of Marietta passed away on November 17,...

Send flowers to the Brewer family.