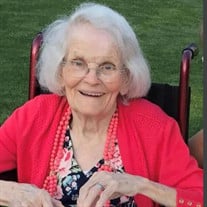 Emma Wheeler Campbell, 96, of Atlanta, Georgia passed away peacefully on March 1, 2021 after a life full of service to the Lord and to her family. Emma was born on February 27, 1925 to B.A. and Stella Wheeler in Atlanta, Georgia. After graduating from Secretary High School in 1943, she started working as a bank teller at Atlanta Federal Savings. She was known for having long lines, as people would wait just to talk with “Mrs. Emma”. She was recognized as the Employee of the Year and was eventually responsible for the company’s payroll. She retired after over 20 years of service. Emma married William Carl Campbell in 1945. Unbeknownst to the both of them, Emma and Billy were in attendance at the opening night of “Gone With the Wind” on Dec 15, 1939. Billy was an ROTC cadet checking credentials at the door, and Emma and her sister Jerry waited outside the Old Georgian Hotel to see Clark Gable, Vivian Lee, and Olivia de Haviland enter the lobby. Emma and Billy were married six years later. They had four children: William Campbell II, Kerry Campbell, Barry Campbell, and Greg Campbell. Emma and Billy lived a life focused on their family and friends, with a core belief that one should always be there for others. Emma was a fierce servant of the Lord and instilled a love of Christ in everyone she knew. Emma served at North Atlanta Church, First Baptist of Atlanta, and Roswell Street Baptist. She was responsible for all gifts and offerings at North Atlanta and served as a volunteer in the video area for Dr. Charles Stanley at First Baptist, distributing videos of the service to those who could not make it in person. In her older years, she loved Roswell Street Baptist Church and made a habit of stopping and greeting every member. She was known for her kind spirit and was passionate about reaching out to those in need. While a resident at Winnward Community, she was extremely active, taking weekly walks to the Marietta City Square and delivering newspapers to other residents. She was known for her contagious laugh and wit and was apparently a pen-pal to Queen Elizabeth before her coronation. She formed deep relationships with her daughter-in-laws: Janet, Cathy, Janice, and Patsy, who thought of her as a mother. She was thrilled that her four sons were able to find such strong love and were able to give her grandchildren and great grandchildren. She dedicated her life to being a wonderful grandmother to Erica (Robert) Henson, Cannon (Kristin) Campbell, William ‘Bill’ Campbell III, Laurie (Preston) Wilder, and Buddy Campbell. She was able to form intimate relationships with six great grandchildren, Maguire and Holden Wilder, Katie and Max Campbell, and Lawton and Ella Campbell, a rare experience that they cherish greatly. Emma was preceded in death by her husband Billy, brothers B.A., Jr, George, Jack, Robert, and Rexford and sister Jerry. She is survived by her children, grandchildren, great grandchildren, and many nieces and nephews who she adored. The family expresses gratitude to the loving caregivers at St. Ives Memory Care of John’s Creek for their exceptional care during her final days. A graveside service at Crestlawn Memorial Cemetery will be held on March 6, 2021 at 11:00am. In lieu of flowers, please send donations to Alzheimer’s Association-Georgia Chapter, 41 Perimeter Center East, Suite 550, Atlanta, Georgia, 30346.

Emma Wheeler Campbell, 96, of Atlanta, Georgia passed away peacefully on March 1, 2021 after a life full of service to the Lord and to her family. Emma was born on February 27, 1925 to B.A. and Stella Wheeler in Atlanta, Georgia. After graduating... View Obituary & Service Information

The family of Mrs. Emma W. Campbell created this Life Tributes page to make it easy to share your memories.

Send flowers to the Campbell family.