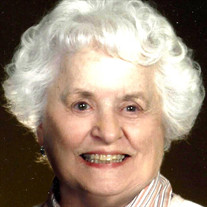 Emmy Lou Eaton Faber entered into the Joy of Everlasting life on January 12, 2021. Born in Utica N.Y. in 1925 Emmy Lou moved with her family to New York City as a child and later moved to Hackensack N.J. graduating from... View Obituary & Service Information

The family of Mrs. Emmy Lou Eaton Faber created this Life Tributes page to make it easy to share your memories.

Send flowers to the Faber family.