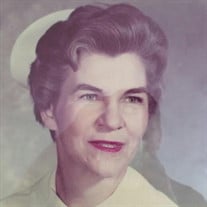 Eva Grace Revell Foster passed away peacefully on November 22, 2020 at the age of 96, after several years of declining health. She had resided in Alpharetta, GA for the past 20 years, but lived for many years in Houston, MS and considered it home. She was born in Greenwood, MS, to John Ethel and Rosa Ellzey Revell. She had a younger brother, John Revell, who prededeased her in 2012. She was married to Willie M. Foster of Houston, MS, who preceded her in death in 1993. Grace graduated from high school in 1942. When the popular movie “Summer of ‘42” came out in 1971, her family teasingly wondered what Grace had been up to that particular summer, but she never said. She graduated from the Baptist Memorial Hospital School of Nursing in Memphis, TN, in 1945. She wanted to join the Women’s Army Corps to serve as a military nurse, but WWII was winding down and nurses were no longer being recruited for the war effort. She spent the next few years traveling and working as an RN in various locations: Touro Clinic and Ochsner Clinic in New Orleans; Hermann Hospital in Houston, TX, where she scrubbed in the OR with pioneering heart surgeon Dr. Michael DeBakey (her claim to fame was that she once accidentally cut Dr. DeBakey’s surgical glove with a scalpel); and UC Berkley, where she attended a seminar in surgical nursing. She eventually settled in Houston, MS, where she worked as an RN in various capacities at Houston Hospital (now Trace Regional Hospital). Seeing a shortage of nurses in the area, she single-handedly started and managed a program to train licensed practical nurses in Houston. Eventually the program was folded into the LPN program at Itawamba Junior College (now Itawamba Community College) – Tupelo, MS campus - and she taught there until she retired. In addition to her nursing career, she was an accomplished cook, seamstress, and crafter. She was active in the First United Methodist Church in Houston, as well as the Delphian Club, a women’s civic club, and the Band Boosters while her daughter was in the junior high and high school bands. Although she never played any sports herself, she enjoyed watching football and baseball and traveled with the family to many Mississippi State University football games. She loved to read and travel. She served as a chaperone on many of her daughter’s trips for high school band and church/youth choir, traveling throughout the eastern US and Canada, as well as an exciting three-week trip to Romania in 1974. After retirement, she traveled with a group to the British Isles, Australia and New Zealand, among other locations. She is survived by her son, Alan Powell (Ruthie, deceased in 2019), of Alpharetta, GA, her daughter, Sara Foster, of Tucker, GA, her grandson Ryan Powell (Grace) of Edgewood, WA, four great-grandsons Samuel, Charlie, Henry, and William, her nephew, John Revell, of Ballwin, MO and her niece Pamela Revell Burkett of Harlingen, TX. No service is planned at this time. Her ashes will be scattered over her husband’s gravesite in Mississippi by the family. Memorial donations may be made to First United Methodist Church in Houston, MS.

Eva Grace Revell Foster passed away peacefully on November 22, 2020 at the age of 96, after several years of declining health. She had resided in Alpharetta, GA for the past 20 years, but lived for many years in Houston, MS and considered it... View Obituary & Service Information

The family of Mrs. Eva Grace Foster created this Life Tributes page to make it easy to share your memories.

Send flowers to the Foster family.