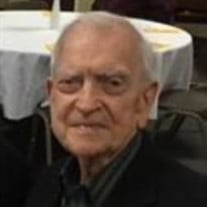 James C. (Jim) Carter, Jr., 92, of Roswell, Georgia, passed away peacefully on August 12, 2021. He was born in Marietta, Georgia on May 26, 1929 to Frances Leona Howard and James Clarence Carter and spent almost his entire life in Georgia. An outstanding high school football player at Marietta High School, Jim continued to stay in touch with his teammates, getting together with them regularly for many decades. Family and friendships were important to him, and he excelled at nurturing them. A graduate of University of Georgia, Jim was an unwavering fan of the Bulldogs. Jim served honorably as a Combat Marine field radio operator during the Korean War and was transferred to Kobe, Japan in January, 1953. It was during that stopover that the young Marine procured two items which he prized the rest of his life: he purchased a split bamboo fly rod, and he was issued a chit which he would later use to procure an ’03 Springfield rifle from the Redstone Arsenal. Jim was honorably discharged from the Marines at the rank of Corporal, and over the next two decades his entrepreneurial spirit found him participating in a newspaper startup (The Atlanta Times) and owning a home repair service. A natural leader with an exceptional aptitude for numbers, he spent the bulk of his career in commercial property management. Jim’s career allowed him to fully enjoy his love of the great outdoors by traveling across the state of Georgia. Many will remember Jim from his time at Phipps Plaza, where he represented Carter and Associates, Inc. as the mall manager for several years in the ‘80s. From Buckhead, Jim would frequently get away with friends and head to the Appalachian foothills for weekend camping trips and fly-fishing for trout. When he left Phipps to join Scott Hudgens Management as a Regional Vice President, Jim and his beloved wife, Rozine, relocated to a beautiful home in St. Simons, near the newly built Glynn Place Mall, which was part of Jim’s regional portfolio. An experienced builder, he designed and oversaw the construction of their new home. Its location allowed him to avidly pursue his love of both golf and deep-sea fishing. Jim’s career once again brought him back to Buckhead, as part of Ben Carter Properties, where he continued working until his retirement. Once again, he could occasionally be found chasing the elusive trout of the Chattahoochee River or just sitting by the water, a milieu he called a “slice of heaven.” He is survived by Rozine M. Carter, his beloved wife of 53 years, and stepdaughters, Nancy Netherland of Kennesaw, GA and Linda (Robert) Hamill of Cumming, GA, as well as a grandson Jason (Jasmin) Allgood of Alpharetta, GA.

James C. (Jim) Carter, Jr., 92, of Roswell, Georgia, passed away peacefully on August 12, 2021. He was born in Marietta, Georgia on May 26, 1929 to Frances Leona Howard and James Clarence Carter and spent almost his entire life in Georgia. An... View Obituary & Service Information

The family of Mr. James C. Carter Jr. created this Life Tributes page to make it easy to share your memories.

Send flowers to the Carter family.