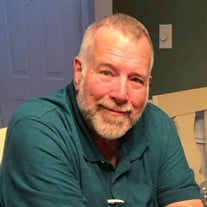 GOSLIN, Jim. James Michael Goslin Age 69 of Hickory Flat, Georgia died in his sleep, August 28th. He was a parishioner at St. Thomas Aquinas Catholic Church for more than 35 years. Jim was born April 27th 1952 to James T. and Mary T. Goslin of Salem, New Jersey. Jim grew up building forts and muskrat trapping in the Jersey meadows. He graduated from Salem High School in 1970 and then obtained an Associates Degree in Agriculture. A farm boy through and through, Jim treasured the time spent in the fields plowing and helping harvest “Jersey” corn and just about any other crop he could help with... except tomatoes. Jim met his beloved Janie and they wed at Our Lady of Sorrows Catholic Church in Linwood, New Jersey on St. Patrick's Day March 17th 1979. They moved to Georgia that year. They had three children: Abigail, Adam and Annie. Jim was widowed in 2013 when Jane died from cancer. In February 2021, Jim became affectionately known as “Paw Paw,” as Declan Gabriel Porter became his first grandchild and godson. Working for Georgia Power for over 30 years, Jim often volunteered to work disaster relief and Powertown where he taught electricity safety to thousands of children. As a volunteer basketball, baseball, and softball coach, Jim helped mentor and shape countless lives. He served on the East Cherokee Baseball Board of Directors and as a roadie for the SHS Marching Band of Chiefs for over a decade. In retirement, Jim volunteered with the Cherokee County Emergency Response Team. In recent years, Jim found joy in substitute teaching for Cherokee County Schools. Jim was ever ready to lend a helping hand to anyone in need and was always looking for ways he could serve his neighbors and community. A servant leader, Jim, never considered a task beneath him. If something needed doing he would get it done and often rally others to help too. Jim was an incredible friend, brother, son, husband, father, and grandfather. He is survived by his beloved dogs Toby and Charlie, his children Abigail and Adam Byron-Goslin and Annie Porter. His son-in law Kyle Porter and grandson Declan Porter. His sister Marian Goslin of Delaware. His mother-in-law Ann K. Byron. Preceded in death by his wife Jane A. Byron-Goslin, his parents James T. Goslin and Mary T. Goslin and his father-in-law Francis J. Byron. On September 14th, the family will receive friends from 2-4pm and 6pm-9pm at Northside Chapel 12050 Crabapple Road, Roswell, Ga 30075. A Divine Mercy Chaplet will be prayed at 3:00pm and a Rosary will be prayed at 8:30pm. The funeral Mass will be Wednesday September 15th at 10am at Saint Thomas Aquinas Catholic Church 535 Rucker Road, Alpharetta, GA 30004. Interment will be at Arlington Memorial Park in Sandy Springs.

The family of Mr. James M. Goslin created this Life Tributes page to make it easy to share your memories.

Send flowers to the Goslin family.