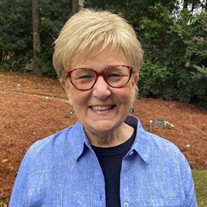 Joanne Lucille Waller Hardeman was born the third child to Fred and Helen (Burgeson) Waller on March 23,1946, and lived north of Loomis until 1954 when the family moved to a farm north of Holdrege. She passed away on March 9,2022 from cancer in Atlanta, GA. She attended school at Westmark 46 and 72, which both were one room schools. She continued her grade school education at R-6 of Holdrege. She graduated from Holdrege High in 1964 and continued her education at Hastings College, graduating in 1968 with High Distinction in Math and English. After graduation, she moved to Minneapalis, MN to work as a technical editor for Control Data Corp. and later Midwest Systems. While there, she met and married Colin Hardeman at the Westmark Evangelical Church in Loomis, NE in 1972. They lived in many interesting places including Miami, FL; Santa Clara, CA; Montreal and Toronto Canada; San Hose, CA; and in 1979 they moved to Marietta, GA. Throughout her 16 years of marriage, Joanne worked for a variety of electronic companies as a technical editor, training developer, and PC technical support engineer. In 1982, Joanne started working for Hewlett-Packard as a Senior Response Center Engineer providing phone support for PC Hardware and software. Joanne was a loyal fan of the Atlanta Braves baseball team and Nebraska Cornhuskers Football. She enjoyed many visits to see family and friends so important to her in Nebraska. Joanne traveled to many places in the world including Australia, Italy, Spain, and Africa for photo safaris. Her trips to Sweden sparked her interest in Family genealogy. With limited information, she was able to find the community where her grandfather, John Waller and his parents lived prior to immigration to the U.S. She also was able to find the location where her maternal grandparents lived. Joanne wrote the Waller Family History book, which she started in 1998 and has continued updates until the present time. In addition to genealogy and travel, she loved gardening and made many quilts as a talented seamstress. She was an excellent cook and enjoyed incorporating antiques into her decor. Upon her retirement, Joanne was asked to join the Atlanta Cotton States Cat Club because of her devotion to cats. This was such a passion for Joanne that she became the Show Manager for one of the largest and most prestigious Cat Shows in the World. For 11 years she produced this event, which hosted over 300 pedigree and household pets from many countries. She also enjoyed showing her own five Exotic cats and achieved both Regional and National Wins. Joanne's fur babies were adopted by members of her Cotton States Family, where they will be loved and cherished. Joanne was dedicated and confirmed at Westmark Church of Loomis where she grew-up. She attended the Northbrook Methodist Church in Georgia along with her cousin Christine and family. She was preceded in death by her parents, Fred and Helen (Burgeson) Waller and one brother, Lloyd Waller of Holdrege. Survivors include two brothers Rodney Waller of Holdrege,NE and Floyd (Pat) Waller of Elm Creek, NE. Nephews are Kenny Waller and Tim Waller of Holdrege and Cody (Megan) Waller of Kearney, NE, and David (Toni) Waller of Colville, WA. Great nieces and nephews are Ryan Waller and Reed (Taylor) Waller, Donny and James Waller of Holdrege and Jackson, Brooklyn, Sophia, and Chloe Waller of Kearney, NE. Also, left to mourn are her family members in Atlanta, GA. Christine Waller Jones, husband, Ron, and their four children, Sarah, Rebecca, Michael, and Matthew and families. Christine Jones was her cousin and the dear 'sister she never had'. A life well lived would describe Joanne's life, by her family and friends in Georgia and Nebraska.

Joanne Lucille Waller Hardeman was born the third child to Fred and Helen (Burgeson) Waller on March 23,1946, and lived north of Loomis until 1954 when the family moved to a farm north of Holdrege. She passed away on March 9,2022 from cancer... View Obituary & Service Information

The family of Joanne Lucille Waller Hardeman created this Life Tributes page to make it easy to share your memories.

Send flowers to the Hardeman family.