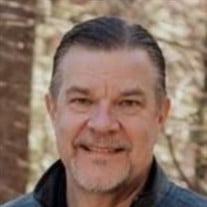 John Lynn Lipscomb, II, of Johns Creek, GA died unexpectedly, but peacefully, at his home with family on Sunday morning, May 8, 2022. Born July 22, 1961, in Jackson, MS, “Little” John was the eldest son of John and Colleen (Thompson) Lipscomb. Raised in Jackson, Mountain Gate, CA and Memphis, TN John graduated from Bartlett High School in 1979 and later received a bachelor’s degree in graphic design from Memphis State University in 1984. John’s career began with the Holiday Inn Corp. in Olive Branch, MS and after Bass Corp. acquired the company, he moved the family, albeit with his wife fighting tooth and nail, to Alpharetta, GA. He spent most of his corporate career traveling, hobnobbing, and wheeling & dealing, but his greatest achievement was his family. Married 39 years to his fun loving, faithful wife Melissa, together they raised two beloved children: daughter, Amanda (son-in love Jeff), and son, Kyle. His greatest joy was being “Papa” and doting on his cherished grandchildren: Davis, John, and Grace. Never one to tell them “no” (well, not too often anyway!), he frequently sacrificed his 6’4” frame for many a piggyback ride, horse pull and tea party. Papa always kept his “pied piper” following well-fed, as his cargo short pockets were always full of strawberry candies and snacks. He was a frequent favorite at birthday parties, school show & tells, little league ball fields and preschool playdates. Everyone loved Papa, as he rarely knew a stranger, and we strongly suspect that upon taking his conservative views to heaven, he was pleasantly greeted by both liberals and libertarians alike. John was literally larger than life and boy did everyone around him know it. A voracious reader, especially all things James Bond and science fiction, there was rarely a subject he couldn’t discuss. His genius bordered on madness as he kept us inundated with his “shower thoughts,” quips of wisdom, and endless showing of Tik Toks. He willingly gave all he had for his family and friends, although often done with debate, simply because he thoroughly enjoyed getting a rise out of everyone. This often happened around his happy place, his thoughtfully constructed fire pit, built with his son Kyle. He was artistically gifted with designing birthday party invites, could fix anything with a hammer and zip ties, loved antiquing with his wife, stockpiling Costco supplies for the zombie apocalypse, and amassed the largest collection of useless Holiday Inn memorabilia this side of their corporate office. He was preceded in death by his best friend and father, John Lynn Lipscomb; grandparents David & Anne Lipscomb and Herman O. & Daisy Thompson; and Uncle Herman Thompson, Jr. John is lovingly and heartbrokenly survived by his mother, Colleen; siblings, Pam (Tim) Holler, Michael (Anya) Lipscomb and Daisy (Christopher) Hogin; a host of adoring nieces, nephews, aunts, uncles, cousins; and dear friends who are like family (you know who you are). A special thank you to John’s cardiac surgeon, Dr. Arthur Katz of West Palm Beach, FL for using his God-given skills to give us four extra years with our treasured Papa, and Dr. David Hall for his treatment here in Johns Creek. A Celebration of Life will be held Saturday, May 14th at 11:00 AM at St. David’s Episcopal Church, Roswell, GA. Northside Chapel (Roswell, GA) is handling the arrangements. In lieu of flowers, please send any donations to the charity that brings you the most joy. Papa would have wanted that and would have added “Don’t let life be soup and you’re the fork.”

The family of Mr. John Lynn Lipscomb II created this Life Tributes page to make it easy to share your memories.

Send flowers to the Lipscomb family.