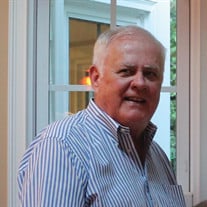 John Terrence “Terry” McManus passed away peacefully at home on March 7th, 2021, surrounded by his wife and five children. Terry was born in Binghamton, New York on September 25, 1939, to John Terrence and Mary Louise McManus. He was the second of five children. After the premature passing of his father in 1946, he was raised by his grandmother and mother in Elmira, New York. Terry graduated from Notre Dame High School and went on to Le Moyne College where he earned his degree in 1962. In 1964 he met his future wife, Margaret (Bunnie) Schumacher. They married in Buffalo, New York on July 3, 1965. Terry began his career teaching at his alma mater, Notre Dame High School, but after a few years he joined IBM where he worked for over twenty-five years, holding positions that took the family around New York state, the southeast, and the Netherlands. During their retirement he and Bunnie spent a wonderful couple years living in Valencia, Spain until his illness brought them back to the States. Although his career in education was short-lived, Terry never stopped teaching. He coached the kids’ sports, provided sage advice and was always ready to help with Latin homework. After retiring, he dedicated time as a substitute teacher, volunteering at Cristo Rey High School, teaching English to non-native speakers at the local library, and tutoring students for their high school equivalency exams. A committed Catholic, he devoted time to those in need through the St. Vincent de Paul Society. In addition to his community service, he loved to watch NCAA basketball and play golf. He was a devoted grandfather of twelve grandchildren and always delighted them with ice cream outings, stories and jokes. “Grandpa Terry” stories are legend among the grandkids. Terry is survived by his wife of 55 years, Bunnie McManus; children Molly (Stu) Guenther of Boise, Idaho; Julie (David) Anderson of Atlanta, Georgia; Ted (Meg Lojek) McManus of McCall, Idaho; Kevin (Cathy Nabbefeld) McManus of Denver, Colorado; and Maureen (Kevin) Skidmore of Munich, Germany; and grandchildren Megan Guenther, Sean Guenther, Owen Anderson, Katie Anderson, Sophie McManus, Jack McManus, Maggie McManus, Teri McManus, Gerry McManus, Anna Skidmore, Julie Skidmore and James Skidmore. He is also survived by sisters Maureen Smith, Judy (Alan) Palinkas, and Mike (Teresa) McManus, and many nieces and nephews. His parents, Mary Louise and John Terrence McManus, sister Mary Louise McManus and brother-in-law Francis Smith preceded him in death. The memorial mass will be held at St. Andrew Catholic Church on March 13, 2021 at 10:30am. A visitation will begin at 9:30am to greet the family. Memorial donations can be made to "The David Scholarship" at Cristo Rey Jesuit School of Atlanta, or to a charity that is special to you. (https://cristoreyatlanta.org)

The family of Mr. John T. McManus created this Life Tributes page to make it easy to share your memories.