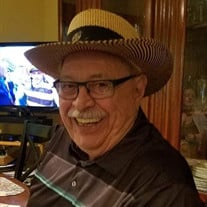 John Evan Norton, 75, of Roswell, GA, passed away on February 15, 2020 peacefully during the night. John was born in May of 1944 to Agnes and Ray Norton, in Highlands, NC. He was the youngest of nine siblings: Herman Norton, Marion Higdon, Leona “Toni” Dupree, Edwin “Bud” Norton, Charlie Ray “Bo” Norton, and is survived by 2 sisters, Nancy McClain and Edna “Sis” Crisp and one brother, Robert “Bob” Norton. His stories of his childhood in the mountains are legendary, entertaining, and possibly accurate. After graduating from Highlands High School in 1962, he went on to earn a Bachelor of Science Degree in civil engineering at North Carolina State University. He was a lifelong proponent of Wolfpack basketball, football and folklore. After graduation, he landed his first job as an engineer for Lockheed where he assisted in the design of the C-5A Galaxy Airlifter. He went on to work as an accomplished civil engineer at Lowe Engineering for 10 years. He then started Engineering and Inspection Systems, Inc. in Roswell, Georgia in 1980 and went on to contribute to the development of much of North Atlanta including Wildwood Office Park, The Bank of America Tower, the Federal Reserve Bank of Atlanta, North Point Mall and many other high profile business and residential developments. He worked as an Engineer and Land Surveyor until his passing. John was a force of nature, he was a warm, friendly, caring individual. His kindness, love, and infectious sense of humor made friends of everyone he met. He was often found in the yard at his family home with his beloved extended family and a host of friends enjoying the outdoors and good music. He enjoyed many hours watching his beloved sports teams; reveling in the drama of the victories and frequent crushing defeats, since he was an Atlanta sports fan. His family meant more to him than anything else in the world, something he often mentioned. John is survived by his wife of 37 years, Darlene Freeland Norton. He gave amazing Christmas presents and was generous beyond reason. He loved her dearly, cherished, and cared for her. He was unendingly proud of his children Rebekah and Patrick, and stepchildren, Julie, Nancy, and Laura and always supported them. He was closely involved in the lives of his nine grandchildren who revered him as a role model and frequent math and science tutor. In lieu of flowers, any donations can be directed to The V Foundation for Cancer Research. There will be a Celebration of Life at Rivercliff Lutheran Church on Saturday February 22, 2020 at 2 p.m. in Strickert Hall.

John Evan Norton, 75, of Roswell, GA, passed away on February 15, 2020 peacefully during the night. John was born in May of 1944 to Agnes and Ray Norton, in Highlands, NC. He was the youngest of nine siblings: Herman Norton, Marion Higdon, Leona... View Obituary & Service Information

The family of Mr. John Evan Norton created this Life Tributes page to make it easy to share your memories.

John Evan Norton, 75, of Roswell, GA, passed away on February...

Send flowers to the Norton family.