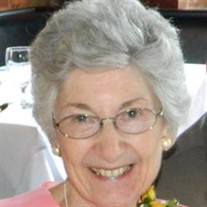 Jolene L. McNichols (Williams), age 81, of Roswell, GA, died August 16, 2020. Jolene was born to J. Frank Williams and Thelma Fluke Williams on November 9, 1938, in Saxton, PA. She is preceded in death by her two brothers, James and Jerry. She is survived by her husband, Charles W. McNichols, of Roswell, GA (formerly of Clemson, SC); her son, Charles (Charlie) McNichols, of Alpharetta, GA; her daughter, Laura Hensley, of Roswell, GA; her sister, Darlene W. Zuercher, of Spring Grove, PA; and her beloved grandchildren. Jolene was a graduate of Saxton Liberty High School, in Saxton, PA, in 1956 and received her B.A. in Music Education from Juniata College, in Huntingdon, PA, in 1960. She worked as an elementary school music teacher in Everett, PA, before her marriage to Charles “Chuck” McNichols in 1964. During Chuck’s 20 year career in the US Air Force, he and Jolene enjoyed living in several different states (including Colorado, California, Virginia, and Ohio), and cultivated many friendships. With Chuck as the pilot of their small airplane, Jolene traveled with her family to destinations throughout the United States, including a much-loved annual beach vacation in Sanibel Island, FL. She enjoyed European travel and lived in Portugal for a semester while Chuck taught in Lisbon. For many years, she taught piano lessons from her home, to students ranging in age from 6 years old to adult. After a move to Clemson, SC, Jolene earned her real estate license and worked as a Realtor. Later, while living in Blacksburg, VA, she was an active volunteer at the Women’s Center of the regional hospital, LewisGale Medical Center. Jolene was a talented and accomplished seamstress and needlewoman. She excelled at creating works of art in embroidery, and completed many fine reproductions of historic samplers and other complex patterns requiring a high level of skill. She was an active member of several needle arts guilds, including the Blacksburg, VA chapter of the Embroiderers’ Guild of America. Jolene enjoyed working in her garden, and was a member of the Clemson Garden Club, where she served terms as president and vice president. She was also a member of the Clemson University Woman’s Club. Jolene spent her leisure hours in the pleasant pursuits of reading, taking walks, and sewing. She was a member of the First Presbyterian Church in Greenville, SC. Throughout Jolene’s life, her most cherished roles were wife, mother, and grandmother, and she hosted many memorable family gatherings at her home. A memorial service for Jolene will be planned for a later date. In lieu of flowers, gifts may be made to Juniata College. Checks should be mailed to the Office of Development, Juniata College, 1700 Moore Street, Huntingdon, PA 16652.

Jolene L. McNichols (Williams), age 81, of Roswell, GA, died August 16, 2020. Jolene was born to J. Frank Williams and Thelma Fluke Williams on November 9, 1938, in Saxton, PA. She is preceded in death by her two brothers, James and Jerry. She... View Obituary & Service Information

The family of Jolene Lilly McNichols created this Life Tributes page to make it easy to share your memories.

Send flowers to the McNichols family.