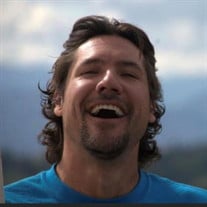 Mr. Jordan Travis Hess, age 50, of Marietta, Ga died peacefully at home on September 22, 2020. He was born in Sheboygan, Wisconsin to John and Kay Hess, the youngest of 5 children. At age 5, he moved to Waukesha, Wisconsin where he attended Saint Joseph’s Catholic School and completed high school at Waukesha South. Jordan relocated to Athens, Ga. to attend the University of Georgia and completed his B.S. in Forest Resources. During that time, Jordan also served in the National Guard as a combat medic. While in college, Jordan met the love of his life Jennie Murphy. They were married in 1994 and their adventures began. They traveled to Alaska to begin a new life together. Jordan and Jennie started Three Moose Meadow Bed and Breakfast, Three Moose Kayaking, and then expanded their vision to Hideaway Cove Wilderness Lodge in Halibut Cove, Alaska. Jordan was a gifted Alaskan guide, naturalist and an adventurer, leading kayak trips to glaciers, educating visitors and at times chasing bears off with a chainsaw. That kept the family busy during the summers. But the LORD had plans for their winters. He directed their path to Peru, to plant a church and minister to the poor. During this time, God blessed them with 6 beautiful boys who assisted and were an integral part of the ministry and the family business. Jordan’s main focus was his family, and filled their life with enough great memories that they would not be able to remember them all. Jordan’s legacy was to share the gospel and the love of Jesus wherever he went. During his life, he sowed many seeds and his utmost desire was to see those seeds come to fruition. Jordan is survived by his loving wife, Jennie and their boys, Jenson (22), Miles (21), Spencer (18), Zachary (17), Graham (13), Israel (10). His adopted girls Flavia, Santa, Yeni, Clavalina, Angelica, and Nicole Alward who will always be his spiritual daughters. He is also survived by his father, John Hess, and siblings: Kim Larson, Kelly Manders, Jaime (Roger) Snyder and Jay Hess. There are many nieces, nephews, cousins, aunts, uncles, friends and members of the Woodshit gang that will miss Jordan tremendously. Celebration of Life Service will be held at World Harvest Church, 320 Hardscrabble Rd Roswell, Ga 30075, On Tuesday September 29, 2020. Visitation will be held 11:00 AM to 1:00 PM followed by a Memorial Service at 1:00 PM. In Lieu of flowers, the family requests donations to the Jordan Hess Memorial Fund at Wells Fargo Bank.

Mr. Jordan Travis Hess, age 50, of Marietta, Ga died peacefully at home on September 22, 2020. He was born in Sheboygan, Wisconsin to John and Kay Hess, the youngest of 5 children. At age 5, he moved to Waukesha, Wisconsin where he attended... View Obituary & Service Information

The family of Jordan Hess created this Life Tributes page to make it easy to share your memories.

Send flowers to the Hess family.