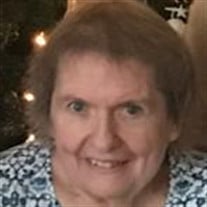 Kathleen Ann Foos, nee Maslyn, 79, of Milton, Georgia passed away on January 25, 2022 after a valiant and courageous thirty-three-year battle with Parkinson’s disease. Kathy was born in Rochester, New York on August 25, 1942 to Francis and Marie Maslyn and she was the oldest of eight children. She married the love of her life, Thomas William Foos on May 25, 1963 and together they raised their two children, Virginia (Ginny) and Timothy (Tim). Kathy was a loving wife, mother, grandmother, aunt, and friend. She spent countless hours volunteering at St. Thomas Aquinas Catholic Church, was a published poet, an avid reader and a wonderful baker. The simplest pleasures in life brought her great joy - birds and birdfeeders, reading, music by Neil Diamond, and spending time with family and friends. Kathy was preceded in death by her parents, Francis and Marie Maslyn and her brother, William Maslyn. Kathy is survived by her loving and devoted husband, Thomas Foos; daughter and son-in-law, Ginny and Jim Tally; son, Tim Foos; four grandchildren, Caroline, Carter and Jacob Tally and Gabrielle Foos; siblings, Michael (Patricia) Maslyn, James Maslyn, Patricia (Richard) Powers, Robert (Rebecca) Maslyn, Thomas Maslyn, and Mary (Serge Fillion) Maslyn; brothers and sisters-in-law, Mary Ann O’Neill, George and Geraldine Foos, Nora Foos, Daniel Foos, John Foos, Charles and Leslie Foos and many nieces and nephews. We would like to offer special thanks to the staff at Delmar Gardens for their dedicated and loving care for the past two and a half years. A Funeral Mass will be held Saturday, February 26, 2022 at St. Thomas Aquinas Catholic Church in Alpharetta, GA at 10:00am with Msgr. James Fennessy officiating. The family will receive friends from 9:00am-10:00am at the church. In lieu of flowers, contributions may be made to Parkinson’s research at Emory University: https://tinyuri.com/EmoryPDresearch

The family of Kathleen Ann Foos created this Life Tributes page to make it easy to share your memories.

Send flowers to the Foos family.